It was a hot one here today.  I spent the day exploring the amazing Mogao Caves, a Unesco World Heritage Site.  These were temples carved out of a cliff in the middle of the desert, and they contained incredible frescoes with early experiments in perspective that predated anything Giotto did by centuries.  They were painted in the most expensive colors at the time:  blue, turquoise, red, and orange.  The colors ended up looking like those from the first experiments in Technicolor.  All of these frescoes have been well preserved by the dry air.  The Indian influence was very apparent in the patterns and designs in some of the earlier caves, which were first built in 366 AD.  Understanding this sort of ornamentation was one of the reasons that I came on this trip.  Unfortunately, there was absolutely no photography allowed within the caves, and sketching was impossible because I could only see them on a guided tour.  It was well worth the trip and the hassle, though, and will hopefully be something that I remember for a long time to come.

One of the caves was originally used as a library, and its entrance was completely concealed by sand for about five hundred years.  When a monk stumbled upon it at the beginning of the twentieth century, word soon got out to the European and American archeologists who were going around pilfering all of Asia’s cultural treasures.  They stole some twenty thousand ancient manuscripts, including the oldest known printed piece of paper, and brought them back to museums in their home countries.  Most of them are now housed at the British Museum.  An american from Harvard ripped many of the frescoes off of the walls, and they are now housed at the Fogg Museum.  Nevertheless, what was there was incredibly impressive.  The caves were also about 25 degrees cooler than the outside air.  For more on the manuscripts, check out:  http://idp.bl.uk/.  Also, check out some of the images of the interiors on Google.

Here are the limited photos that I have for the day:

The entrance to one of the more impressive caves, containing a 35-meter tall Buddha that was carved out of the rock. He was seated this time, and was wearing brilliant red robes. There was also a beautiful reclining Buddha in another cave, along with the frescoes that I mentioned above. 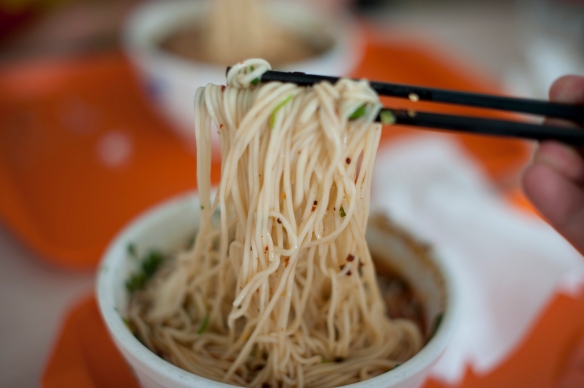 The delicious noodles, piping hot. For some reason, the Chinese think it's a good idea to eat ridiculously hot food on a hot day. I don't get it.

6 thoughts on “Beating the Heat”