My efforts to keep up with the pace of China may have been a little too much for me.  I went to bed last night with a tickle in my throat, and woke up this morning with a full-blown head cold.  I guess it was fortunate that I didn’t get a train ride out of here today, because I was able to spend most of the day in bed, trying to recover as quickly as possible.  Despite being occasionally awakened by persistent chambermaids trying to clean the room (evidently the “Do not disturb” sign is just for show), I was able to get a lot of rest today, but I still feel pretty bad.  Hopefully, I’ll feel better by tomorrow, when I have an epic 30-hour train ride to Kashgar.

I made it out late this afternoon to get some soup for dinner.  The temperature climbed to 105 degrees today, and it was still pretty hot when I went out at 7:30 (Beijing time, which would be 5:30 if the country were not all on the same time zone).  I can’t remember if it’s good to sweat out a cold, but I gave it some effort.  Turpan is in China’s Death Valley, and is at the second lowest elevation in the world (behind the Dead Sea), which makes it incredibly hot.  Unlike Death Valley, however, this is an oasis, so there is water.

I was feeling pretty stuffed up and pretty down when I was wandering around the bazaar, trying to find something to eat that wouldn’t make me feel worse, when a kindly old Uighur gentleman, named Abdullah, invited me to sit next to him.  He insisted that I take a kabob from him, and then he ordered me up some soup with noodles and beans.  Surprisingly, it was exactly what I needed.  I thanked him profusely in extremely broken Uighur, and he was on his way.

Here are some photos that I took from my excursion:

For those of you who wondered what breakfast is like in China, this is what it looks like at this hotel (not representative of the rest of China).

All the signs in this region are in both Uighur and Mandarin. 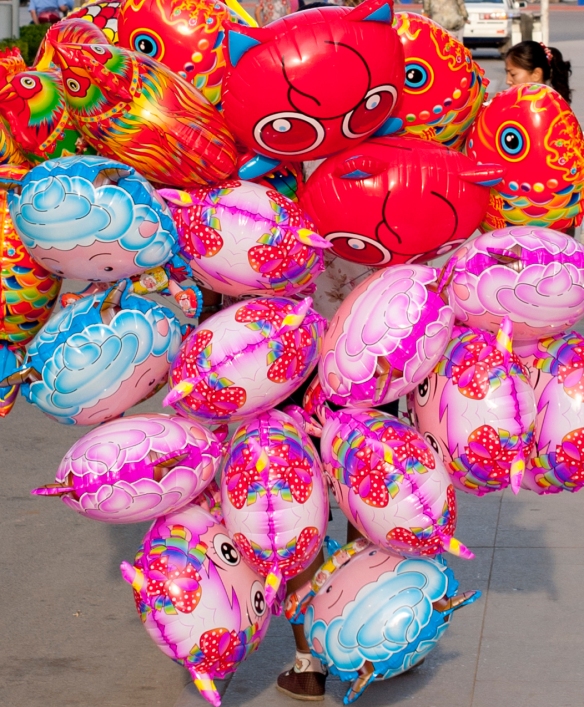 A balloon to brighten your day?

Yes, the bazaar does sell carpets.

You can also find every kind of nut or dried fruit imaginable.

My dinner is prepared.

My dinner: soup with noodles and beans for my cold. The beans were a challenge to eat with chopsticks, considering that I couldn't see them through the broth. 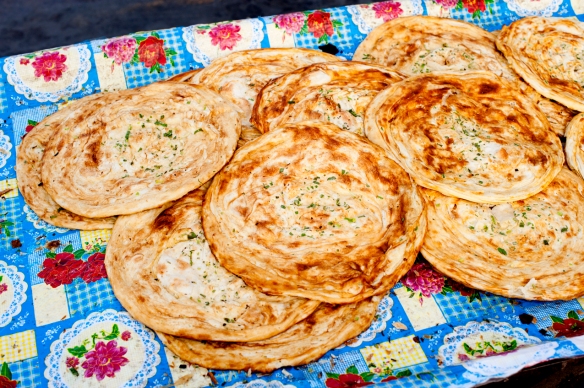 Uighur nan is terrific. It's made in a special kind of wood-burning oven, and gets its flavor from scallions.

There is never any problem finding fruit in this part of the world.

This level of ornamentation shows up everywhere in buildings that were built more than 20 years ago. 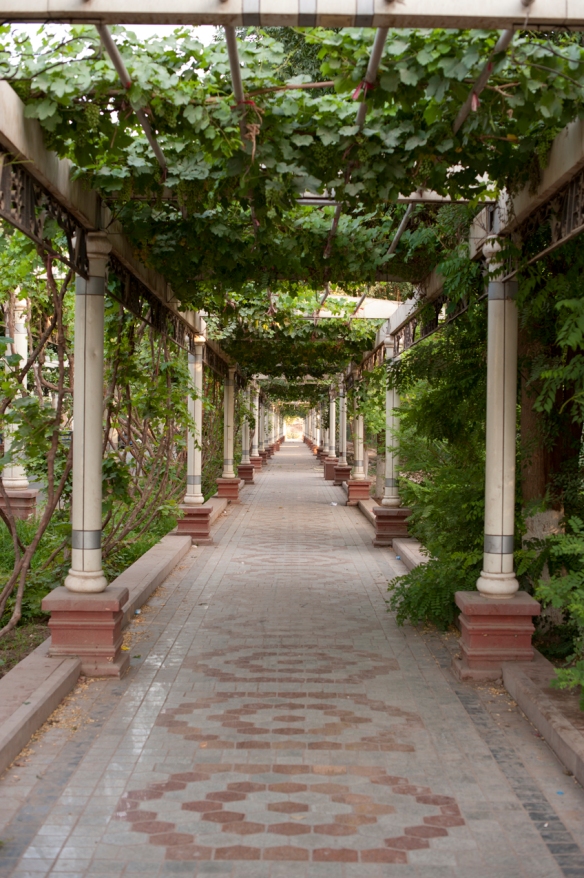 Turpan is full of these grapevine-covered streets. On hot days like today, it's noticeably cooler under here, and deliciously fragrant.

2 thoughts on “A Cold in the Desert”