After the grueling trip that I mentioned in my last post, I’m finally settled into Kashgar, the city that I was most looking forward to visiting in China.  I’ve heard stories about how it is quickly being torn down by the Chinese government, and hoped to get here before it’s all gone.  I’ll be here for four days before saying “goodbye” to China, and heading to Kyrgyzstan.

Unfortunately, I learned today that my plans for making it to Kyrgyzstan have hit a bump in the road.  It seems that the boarder crossing is not going to be as easy as I thought it would be.  Without spending a fortune, it’s pretty hard for one person to make it across, unless that person wants to take a 24-hour bus ride over incredibly dangerous mountain roads (paved and not paved).  The more direct pass through the mountains that I was planning to take is officially closed to foreigners.  So, it looks like I’ll be flying to Bishkek, giving up my dream of doing this part all overland.  The flight is not direct, so I’ll be flying back near where I was two days ago before catching a connection to Bishkek.  Unfortunately, this also means that I will not be making it to Osh, the only Silk Road town in Kyrgyzstan.  Never fear, though.  I will still find a yurt in which to stay.

Without further ado, here are the long-awaited photos from the past few days (remember to click to enlarge):

The Train Ride (apologies for the excess of out-the-moving-train-window shots): 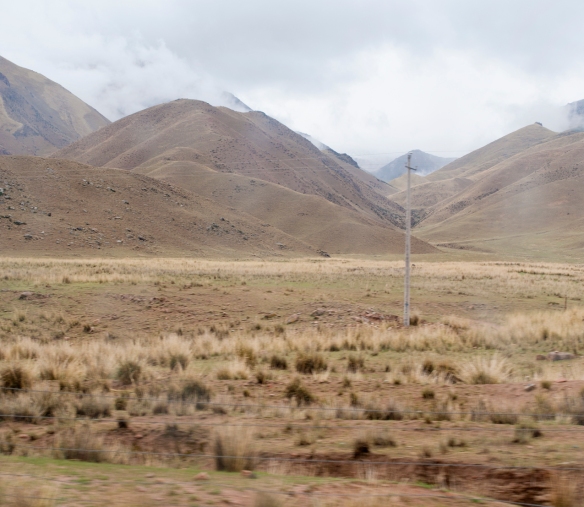 The first part of our journey was a gradual ascent into the foothills of the Tian Shan Mountains. It rained for most of the evening, which, I understand, was an exceedingly rare event.

This was the view out the train window in the morning.

We eventually moved deeper into the desert. I wish I knew the name of that peak over to the left. I know if must have been huge because it took about two hours for it do disappear from view.

This was my prison for almost 32 hours. For those who were wondering, yes, I was still sick, and yes, it was miserable. My head was pounding, and I was in and out of delirious consciousness for most of the ride. Fortunately, the other people in my area were able to amuse themselves by watching me sleep, or pointing at me, telling hilarious jokes, and laughing. 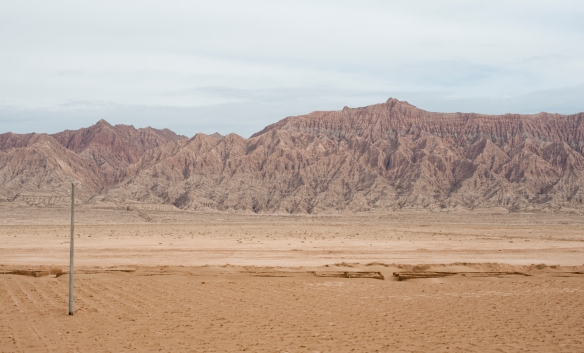 On the far distant side of this mountain range is Kyrgyzstan, my next destination.

The unforgiving Taklamakan Desert was made slightly more forgiving after two surprising days of rain. 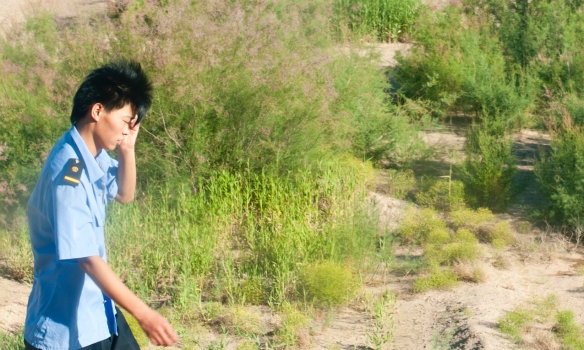 At one of our many stops, a bunch of conductors got out and scratched their heads for a while.

This photo was taken around hour 28. There were 3.5 hours to go, and that felt like way too much time. Many people go off into the woods, or climb a mountain to find solitude. Let me tell you, if your really ever want to be truly alone, try taking a 1.5-day train ride in a cramped hard-sleeper car with woefully inadequate language skills. Of course, the fact that I read both "Notes from the Underground" and "Jude the Obscure" when not passed out from delirium probably contributed to this state.

Kashgar is one of those cities that I was really looking forward to seeing. I knew that the old section of town was gradually being destroyed by the Chinese, and there is not all that much of it left. I'm glad that I got a chance to see it, but I wish I had been here five years ago. In another five years, it might not be here at all anymore, or will just be a tourist attraction devoid of any context or function. 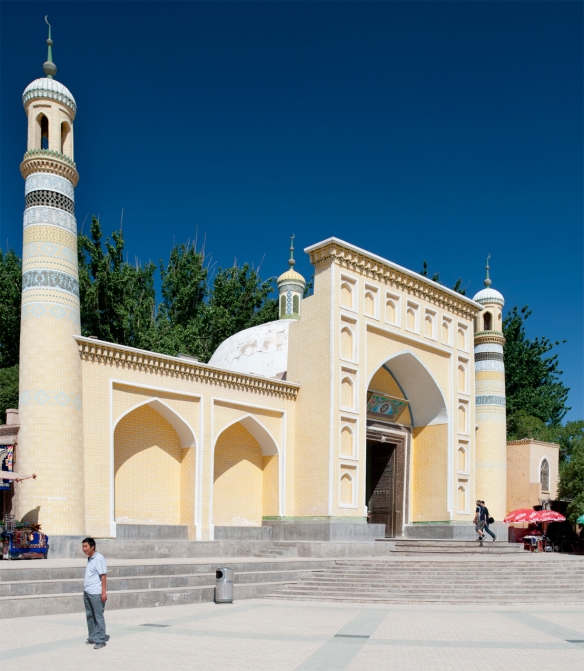 The Id Kah Mosque is one of the largest in China, and can hold 20,000 people at capacity.

The interior of the mosque is actually mostly garden. It is lined by these classrooms and studies on the perimeter.

The open prayer hall is approached through the garden.

A glimpse through the main gate 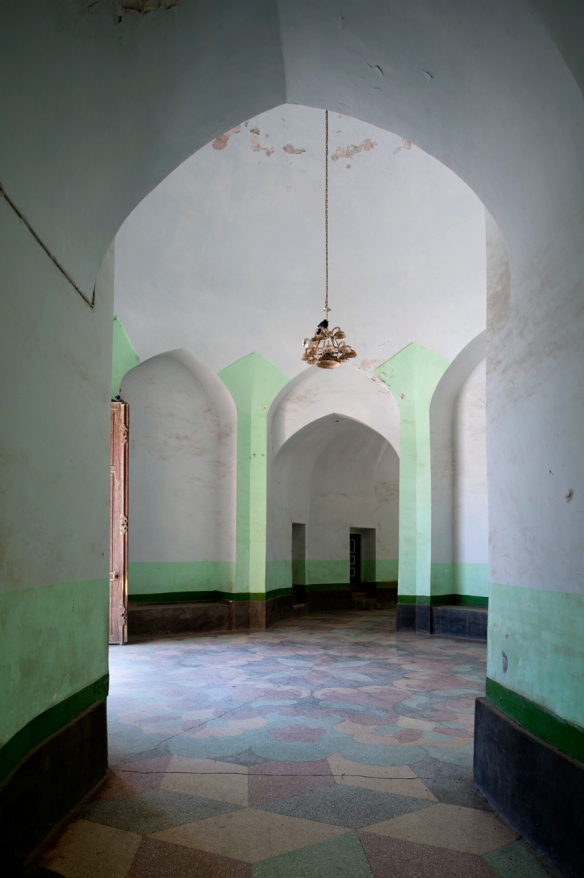 The domed area behind the main gate serves as a transition piece between the street outside, and the interior garden. 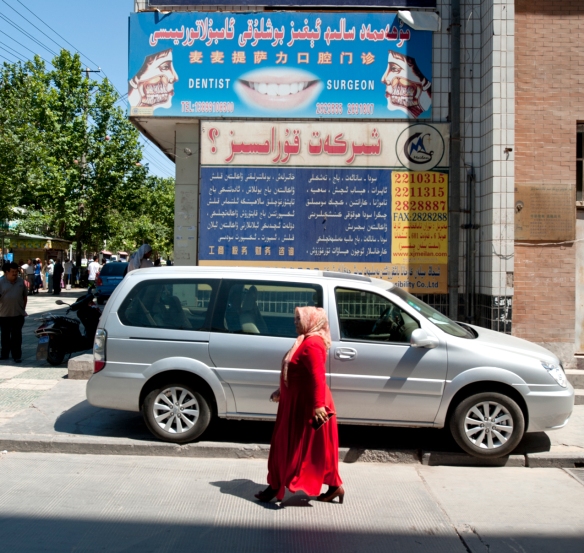 Believe it or not, I found more than a few dental offices in town. 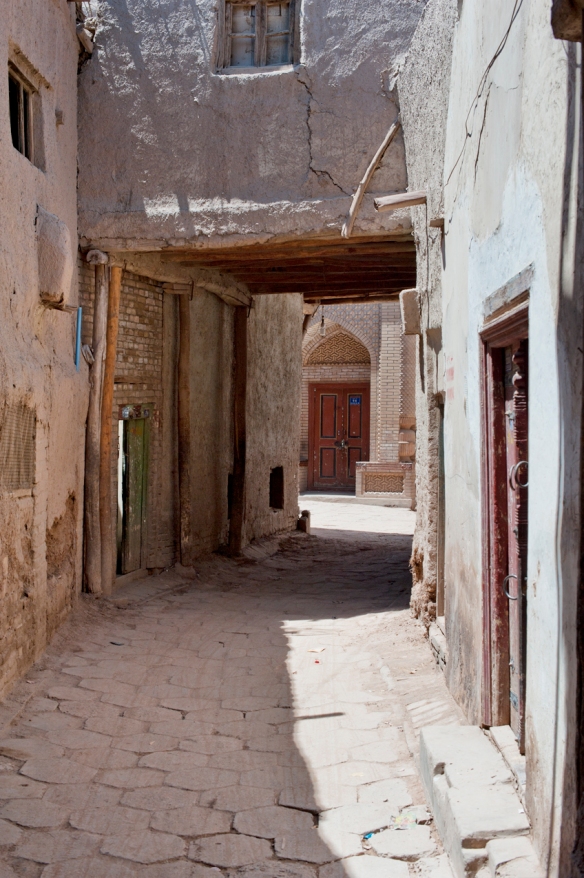 I can't help but be drawn through these old alleyways.

Somewhat shockingly, bagels are a local specialty here. They're pretty good, actually - very chewy, and crispy on the outside. I'm not familiar with the actual origins of bagels, but I was pretty surprised to find them here. Are they a Silk Road import or export? 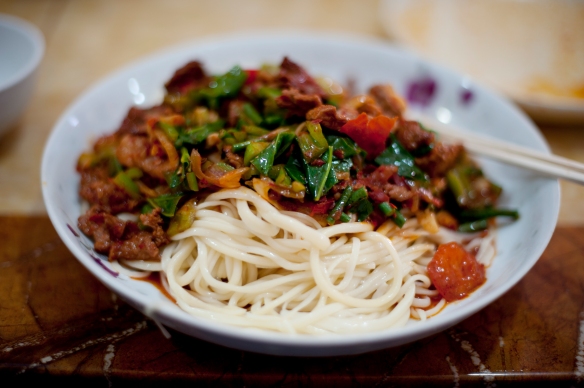 My lunch - hand pulled noodles with meet and vegetables. These might be becoming redundant, although this one was not as good as the others. The mutton was really tough.

The Old Town will soon look like every other Chinese city. I'm a bit torn about this because I have nothing against progress, but my problem is that it comes at the expense of culture (a culture completely distinct from that of the region's colonizers). There are signs all over town that say how well the Chinese and the Uighurs get along, and how much the Chinese respect the local culture. Tearing down the old city, and preserving small elements like the mosque, does nothing but homogenize the country while preserving neutered monuments. I guess the alternative might be something like Venice, though, a tourist attraction that is trapped in its own history.

I held myself back from exploring behind this door.

4 thoughts on “Finally in Kashgar”