I flew over an endless series of rugged mountains on my way to Bishkek, Kyrgyzstan this morning.  Although geographically close to Kashgar, my most recent destination in China, I exited the plane in a completely different world.  The biggest shock:  there are lots of people here who look like me, and they are all Russian.  Although somewhat annoying, I got used to the fact that everyone in China assumed that they could not communicate to me because I looked like a stupid foreigner.  Here, however, everyone assumes that I’m one of the countless Russians who stayed on after the fall of the Soviet Union.  There are pros and cons to this phenomenon.  For instance, it’s nice to not stick out like a sore thumb, but at the same time, there are many fewer people asking me if I need help reading a menu, etc.  Bishkek is a fairly cosmopolitan city, however, and I think that when I head out to the countryside tomorrow, I will experience a completely different situation.  It will also give me a chance to try to increase my Kyrgyz vocabulary from five words to at least twelve, instead of working on my Russian here.

If you are a connoisseur of decaying Soviet architecture, and enjoy lush tree-lined streets, then Bishkek is the place for you.  I spent the day wandering around town, and getting my bearings in the new country.  This is probably the most lush city that I have ever seen.  It comes as a bit of a shock, since I’ve been traveling through the desert since my first week.  Well, I’m certainly not in the desert now, which is just on the opposite side of the massive chain of mountains that make up most of the country.  There are probably four times as many trees in this city as people, which makes Bishkek a nice city for walking around during the day in the summer.  I don’t feel the need to stay here for any longer length of time, though.

I’m only spending one night here now, but will be back for another day before I head to Uzbekistan next week.  Tomorrow, I’m heading up beyond the mountains in the photo above, to the town of Kochkor.  From there, I’ll hopefully spend a couple of days trekking through the mountains (hopefully on horseback), and sleeping in shepherds’ yurts.  I’ll have to see what I’m able to organize when I get there, though.  At the very least, I’ll make my way up to the high pastures, hike around a little, and stay in a yurt at least one night.

I won’t have internet access until I get back to Bishkek on the 27th, so I’ll post all of the images from the mountains then.

Here are the photos from my first day in Kyrgyzstan (click to enlarge):

This is my authentic Soviet era hotel!

Staying in an old Soviet era hotel yields all sorts of interesting surprises. For instance, take a look at these elevator call buttons. Up means down, down means up, and while you're at it, just push both buttons. 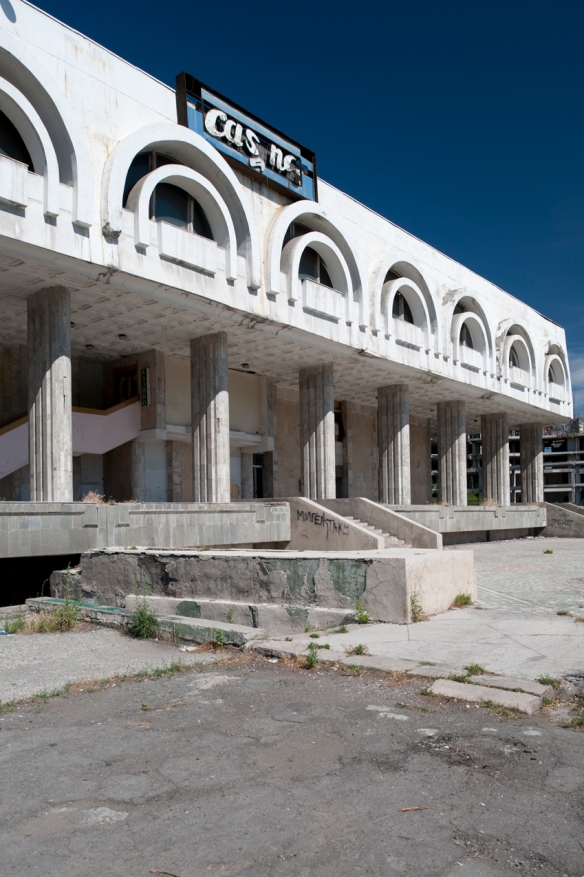 This old casino is across the street from my hotel - a relic of a bygone era. 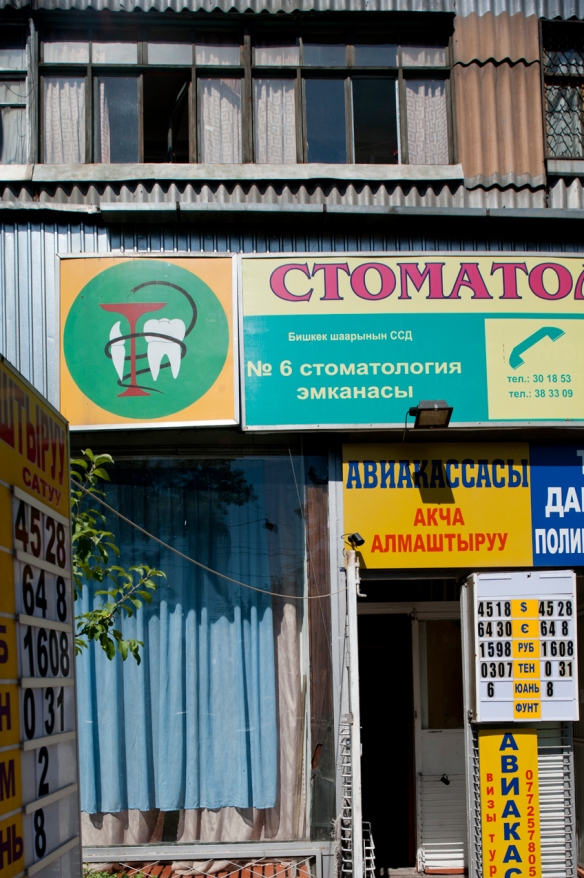 This is yet another installment in my series: Dental Offices of the World! 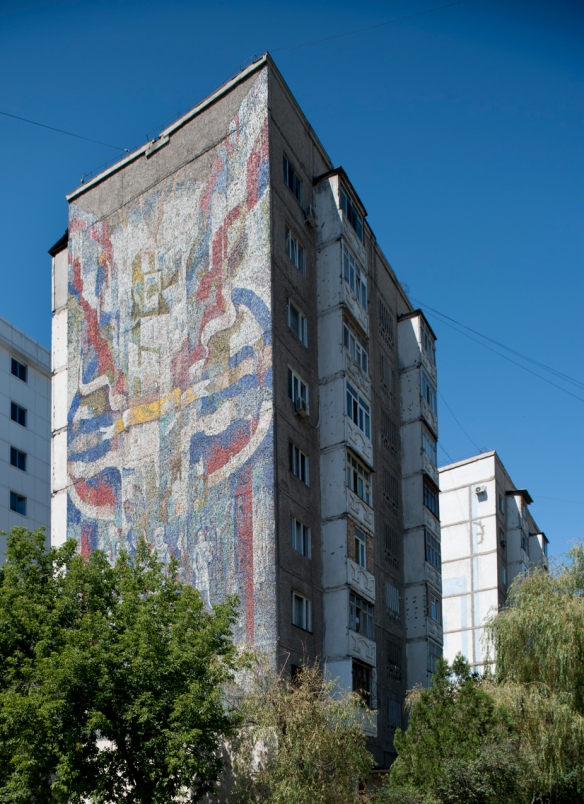 This old Soviet apartment block has an intricate mosaic design on its flank - somewhat of an anachronism. 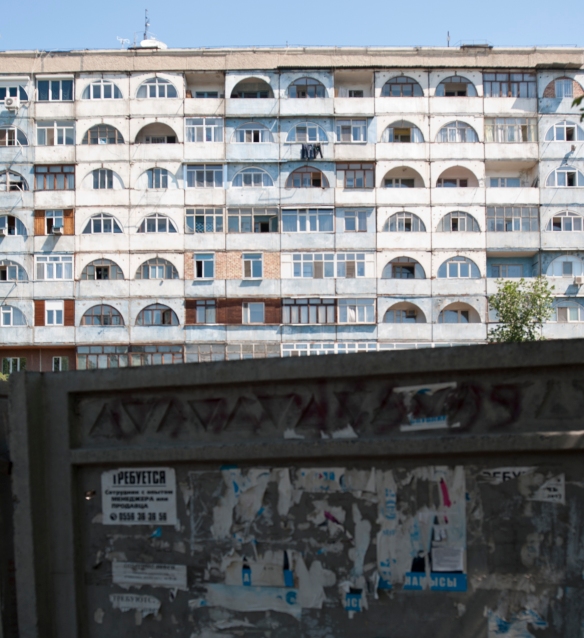 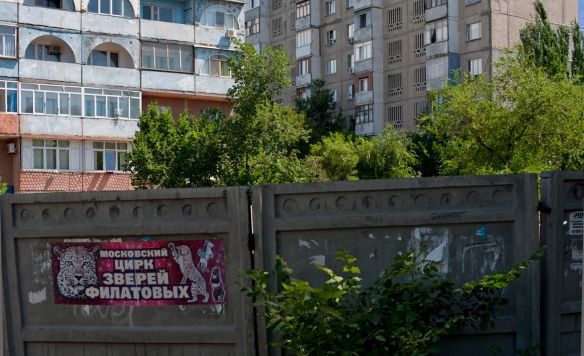 I haven't seen this preponderance of concrete apartment blocks since being in Poland at the age of five, and I hardly remember that.

After walking around for way too long, I finally decided on this place for lunch. It specialized in southern Kyrgyz specialties from Jalal Abad, and diners sit on what look like beds while they eat. 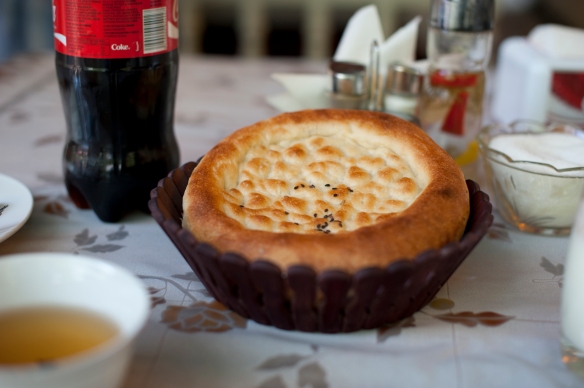 My waiter and I had a lot of trouble communicating. I asked him, in the worst Kyrgyz he had ever heard, what he recommended on the menu. He pointed to several different words, and not understanding what any of them meant, I just picked the first one to which he pointed. Then, we had a long pantomime discussion about what I would have to drink (I won't even mention how he finally led me to understand the word for milk). I just selectively nodded and shook my head until he seemed satisfied. Ten minutes later, in addition to the nan that I had ordered, he returned with a pot of tea, a fresh yogurt drink, a one-liter bottle of coke, and a pitcher of fermented milk. Needless to say, my bladder was a little full for the rest of the afternoon.

This was the meal that I guess I ordered. It was delicious. I think it was sort of a stir-fried beef and vegetable dish that was very nicely spiced. I enjoyed it with my nan, and assorted beverages. 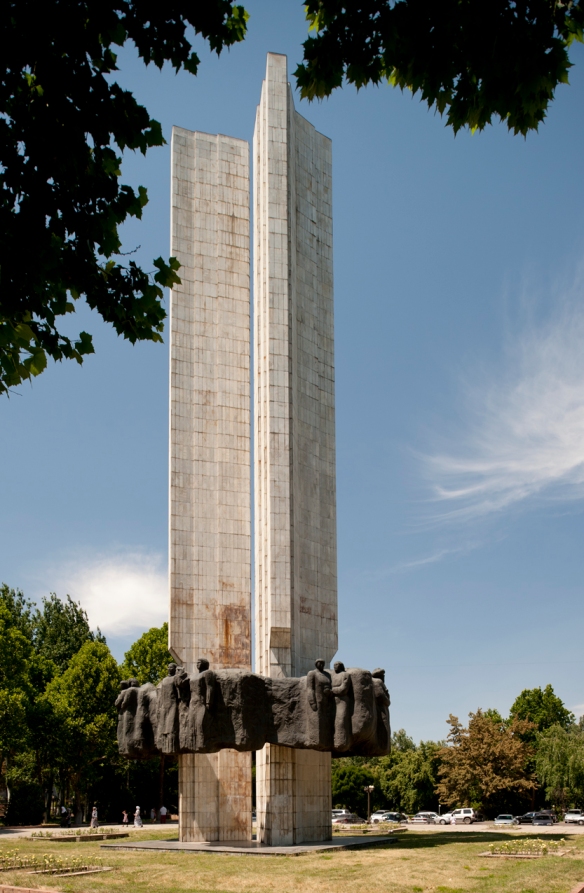 Bishkek has a whole slew of monuments to a number of wars.

I found this disturbingly rusty amusement park behind the Kyrgyz White House. 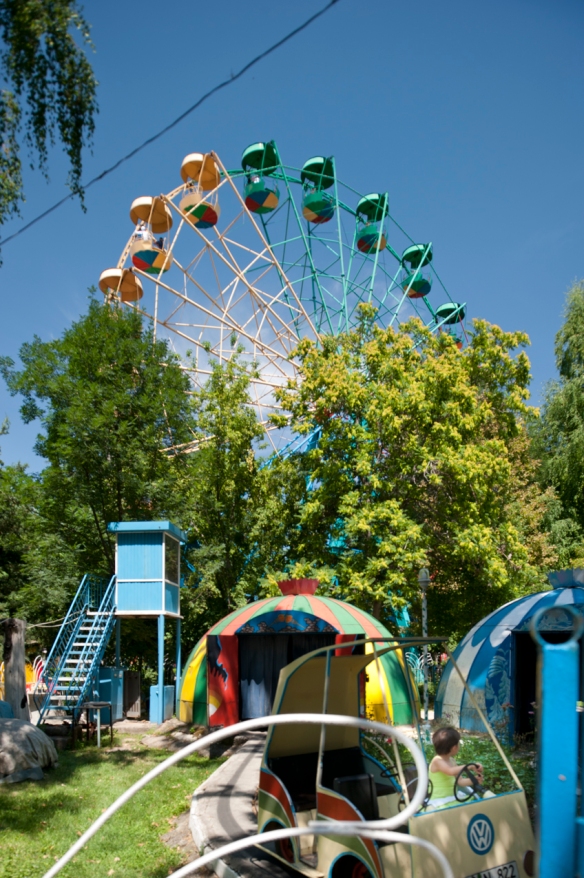 Every ride made the most painful noises of metal grinding on metal, including the rickety ferris wheel in the background. I decided against going up there for the view.

This is the old circus, that was supposedly a huge attraction during the Soviet era.

What a quaint university building!

Bishkek is full of these verdant parks and shady lanes. 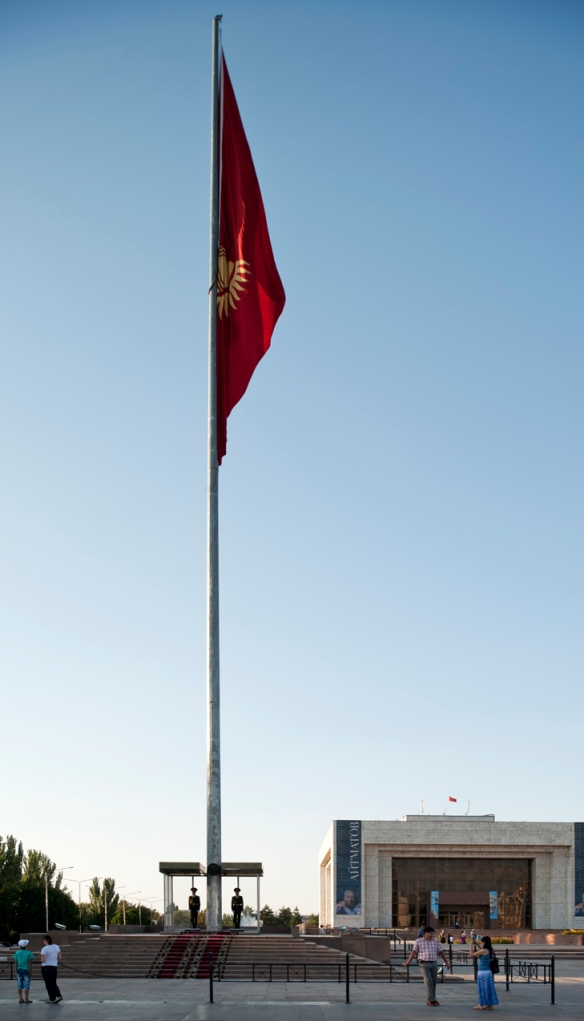 The Kyrgyz decided that they just couldn't give up the old Soviet imagery.

All of the officials in this country wear comically large hats. You can barely see a couple of them here.

The summer sun traces long shadows in the countless parks in the evening.

Wouldn't you like to have your picture taken with this crew?

While many former Soviet states ritualistically tore down all of their old Bolshevik statues, the Kyrgyz couldn't bear to part with them. Why get rid of this perfectly good statue? 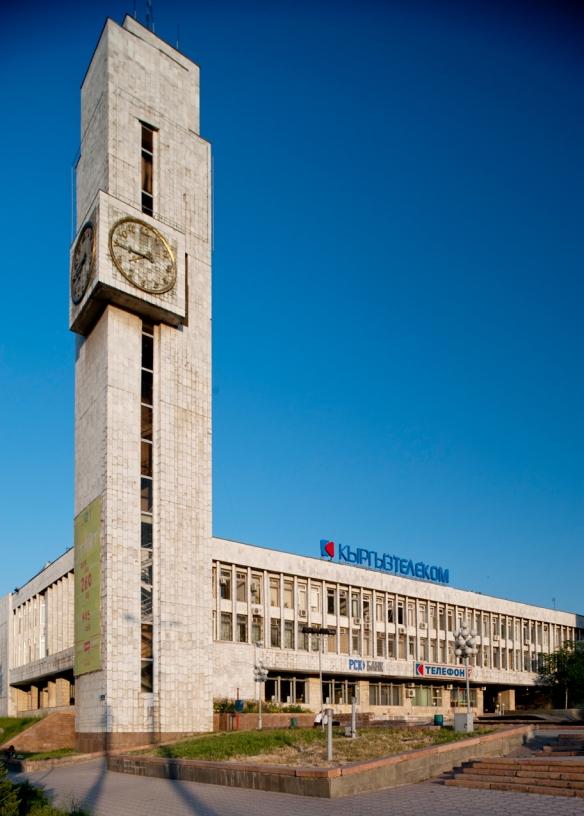 A remnant from an optimistically modern age.

This monument, and abstracted yurt commemorating victory in World War II, with an eternal flame, becomes both a great place to take wedding pictures, and a skate park.