When he arrived here on his push eastward, Alexander the Great said of Samarkand, “Everything that I have heard about [Samarkand] is true, except that it is more beautiful than I ever imagined.”  Well, since then, Chinggis Khan destroyed the original city, but Temur built it back up to its former glory.  I have to say that, like Alexander, I’m pretty impressed.  I had heard that when the Russians conquered the region, they had fixed up and restored many of the original monuments.  I thought that I might have a problem with this, but it has not made a difference to me.

The only slight bump in the road that I’ve encountered is that I accidentally purchased first class train tickets throughout this country.  Normally, this would actually be a good thing, but instead of being in a typical train car, in first class, you end up in closed compartments.  Because the only people who travel first class are Russians, I ended up trapped for four and a half hours in a tight compartment with an incredibly noisy, and somewhat rude Russian family.  The two little girls spent most of the trip having a screaming contest, thus dashing any hopes that I had of catching up on some much needed sleep.  I have also enjoyed picking up some of the local color in the second class cars, and I will miss out on that throughout this country.

Also, if you’re wondering why I didn’t post yesterday, the wifi was down at my B&B, but it’s back up now, except that the power recently went out for the whole neighborhood.

Anyway, here are the photos from my first day here.  I know that there are a lot of them, and there are countless more great ones that I’ve left out, but this is a pretty photogenic city, and there’s a lot of  inspiring architecture.  I’ll post the others from today later this evening (my time).  Click to enlarge:

I found this great al fresco lunch place near the bazaar. Unfortunately, I guess that I ordered bland soup. The bread was good, though. 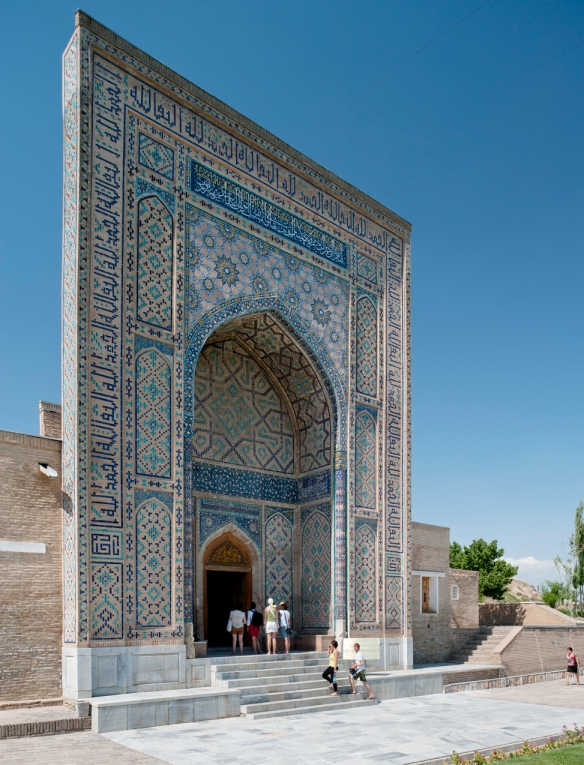 This is Shah-I-Zinda, a beautiful series of mausoleums built by Timur and his grandson, Ulugbek.

Once through the main gate, these stairs lead up to the row of mausoleums.

A peak through the upper gate

The tile-work up here is the most intricate that I have ever seen. The colors are striking against the yellow desert earth.

There is color around every corner.

I can't imagine how long it would have taken to both design and implement this tile work.

The inner sanctum of the complex supposedly houses the remains of Qusam ibn-Abbas, the cousin of the Prophet Muhammed, who brought Islam to the region. 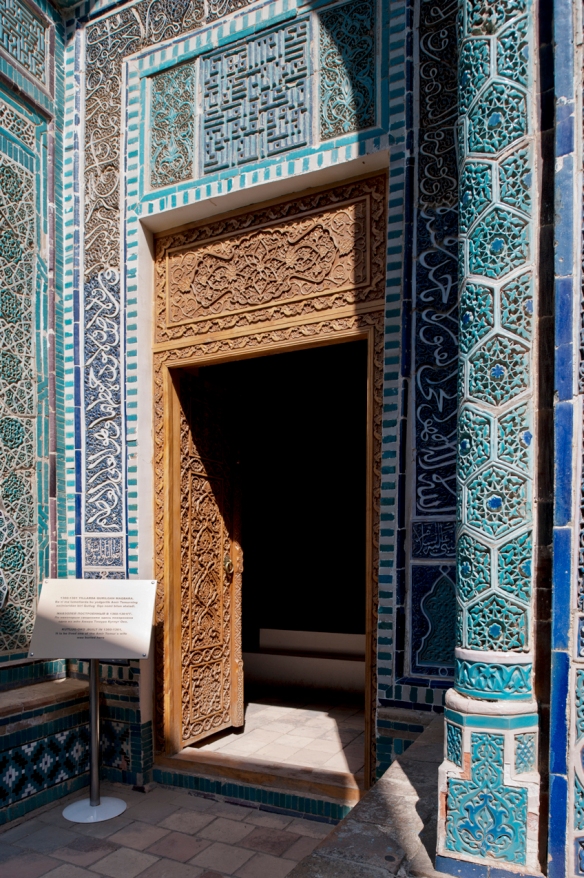 This mausoleum was built for Timur's sister. 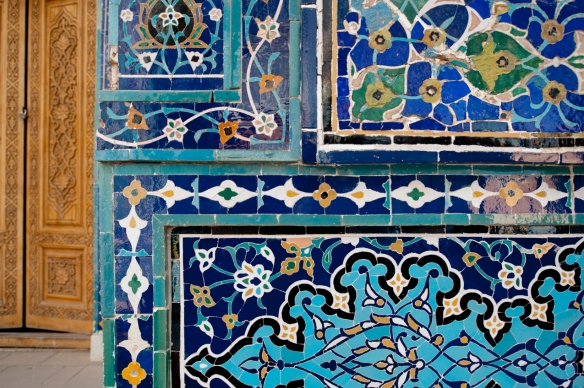 It features the most tightly spaced tile-work that I have ever seen, which has required absolutely no touch-ups in 700 years.

There's a cemetery on the hillside by the Shah-I-Zinda. There is an interesting trend here: people have their images laser-etched on their tombstones. It makes a trip to the cemetery a little more personal, because one feels like all of these dead people are staring back.

It's hard not to take a lot of pictures around here. I took over 400 in one day. 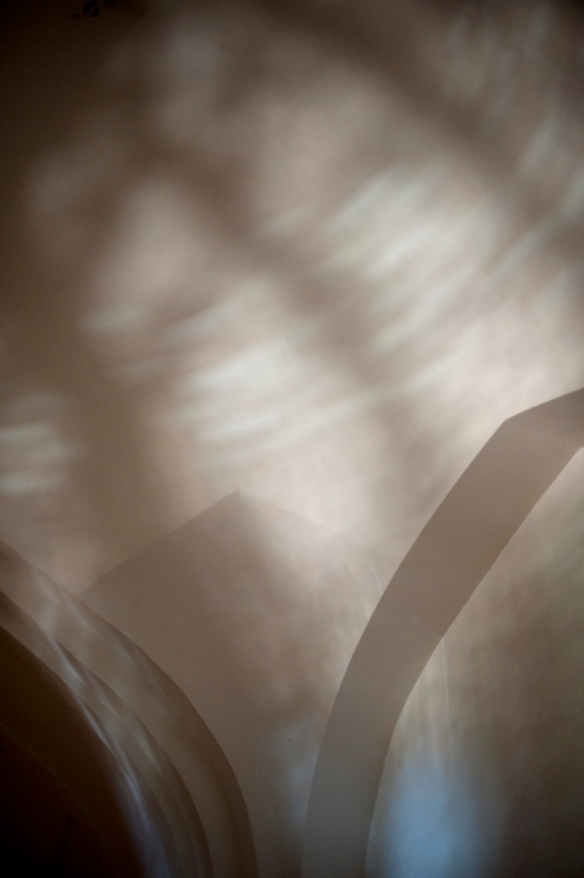 For those wondering about the patterns that the window grilles make on the interior, here's an example from the interior of the mosque at the site.

This is one of many groups of people who asked to have their picture taken with me. I think that they must have mistaken me for someone else. They couldn't figure out how to operate my camera, so I'm not in the photo that I have of them. 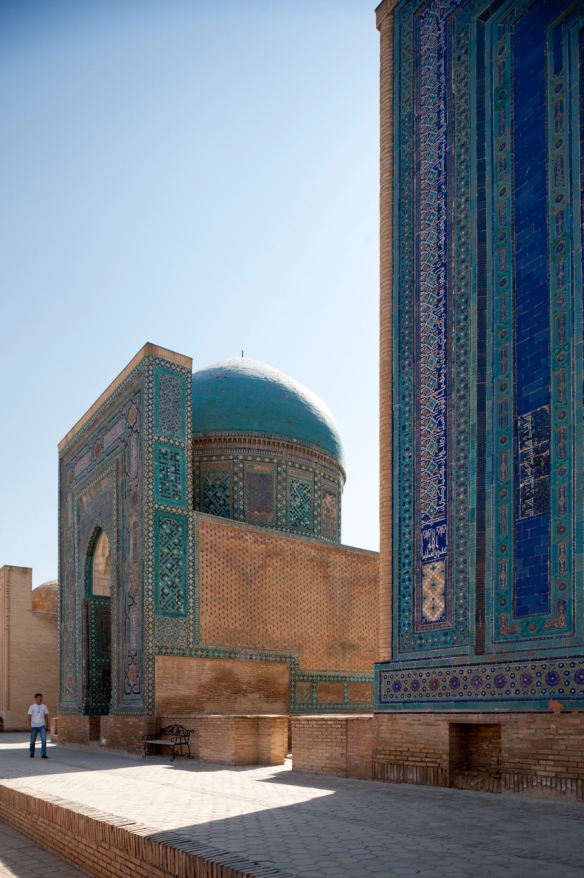 The domes behind the entrances, like the one seen here, provide the jaw-dropping interiors (not seen in photos because it's too dark inside).

These colors were expensive, and hard to come by at the time that they were used to make these mosaics.

This site is still a hugely popular pilgrimage site, and people come from all across Central Asia to pray near the tomb of Qusam ibn-Abbas.

The intricacy of the tile-work can only be understood close-up. From afar, it blends into an ocean of color, but up close, new worlds can be discovered.

All of Samarkand's ancient buildings have these turquoise domes.

This is one of the buildings in the huge medressa complex, called the Registan. 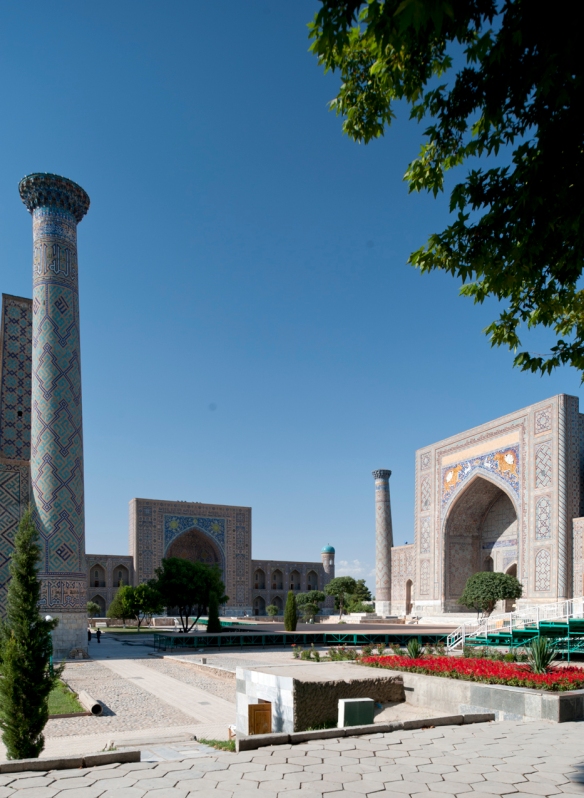 Supposedly one of the great public squares in all the world, the space enclosed by the three Registan medressas is currently occupied by a stage and a temporary grandstand for a music festival at the end of August. I was more than a little bit disappointed, especially since it seems like the kind of thing that could be erected in a week, and I'm not sure why the plaza is obstructed for the whole summer.

This is the interior courtyard of one of the medressas. For a small donation to the Registan guards' retirement fund, I was able to get up to the second floor balcony, and up to the top of one of the minarets.

The stairway in the minaret got progressively tighter. It wasn't quite as bad as the Mati-Si cliff temple, though.

Ulugbek, who founded this Medressa, was not only Timur's successor as ruler of all of Central Asia, but was also the math professor here.

One can see where the math skills came in handy when design this structure.

The white of the entrance corridor of the Ulugbek Medressa is a refreshing contrast to the exterior ornamentation.

The evening sun casts its glow through the gate.

The scale figure in this image is the guard whose palm I greased to get up in the minaret.

This is the gate to the medressa to the north. Each of the gates has a completely different motif. 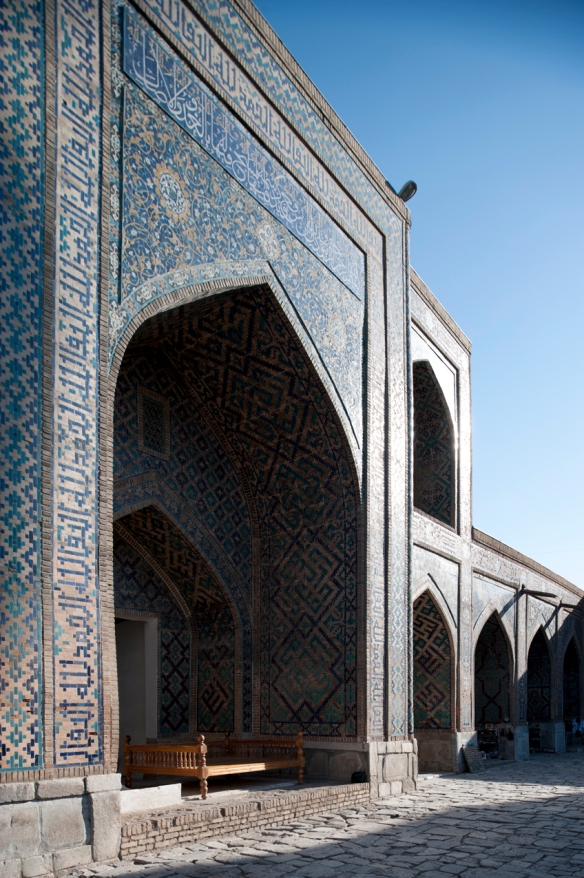 The object that looks like a bed in this picture is actually a sort of seat that Uzbeks use to unwind in the heat of the afternoon. They take their shoes off, and sit and have tea, or take a quick nap. 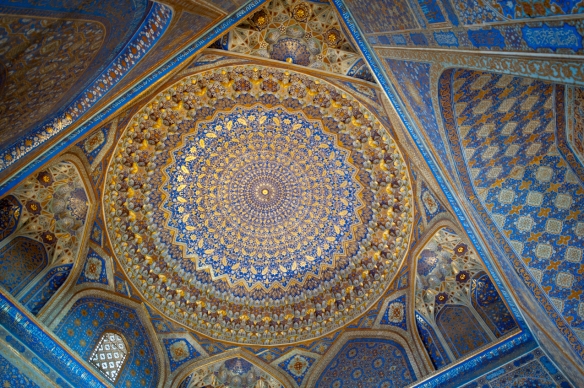 They must have had some extra gold laying around when they built this mosque. Although seemingly domed on the interior, the roof is flat, which could provide some nice poche space for future mechanical and plumbing installations. I'm joking, of course. It would be much simpler, and probably better acoustically, to just drop in an ACT grid ceiling.

Not a bad spot for a nap.

Absolutely every surface becomes a place for ornament and pattern.

I'm out of words to describe this.

My dinner. Unfortunately, a good portion of the sauce ended up on one of the two good shirts that I brought with me. 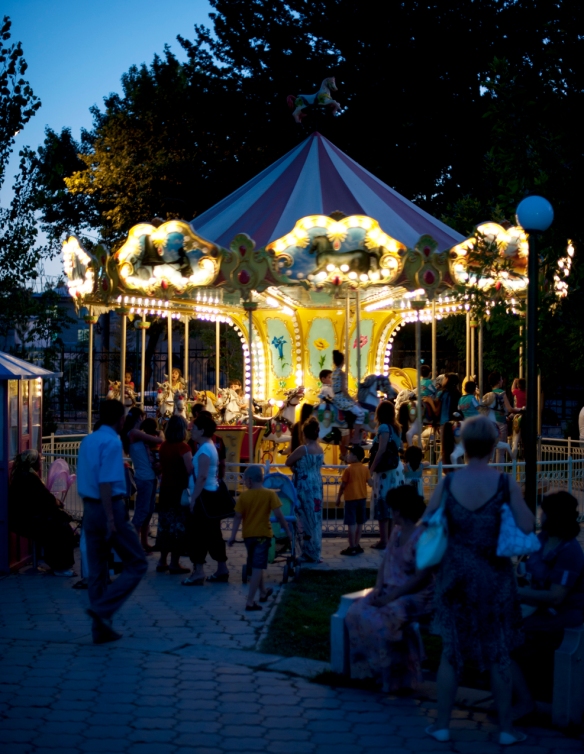 Strolling through the Russian section of town in the evening, I discovered this small amusement park.

4 thoughts on “The Golden Road to Samarkand”