I was told that my post was a little boring yesterday, so hopefully this one will be a little more interesting.  I spent the day going to a couple of more sites, and strolling around the Old Town.

I started at a huge mosque near the city’s other historical sites, and then made my way towards the archeological excavations of old pre-Chinggis-Khan Samarkand.  There was a small museum there, in which the electricity wasn’t working.  I saw a bunch of broken pots, and walked into the completely dark room that contains a famous fresco that was unearthed here, but was obviously unable to see anything.  I then pushed on out of town on foot towards a couple more sites that were equally underwhelming.

Just when I thought that I had seen everything that Samarkand had to offer, and as I was walking back to my hotel after dinner, I was summoned into the courtyard of an Old Town house for an impromptu photo shoot with its inhabitants.  One thing led to another, and before I knew it, I was guzzling tea, inhaling watermelon, and enjoying some local sweets.  They’ve asked me to come by tomorrow morning for breakfast before I head to Bukhara, and I tried to explain to them that breakfast is included at my B&B, but they didn’t want to take no for an answer.  Finally, I think that they understood.

Here are the day’s pictures:

Another image of tile-work.

Yes, this is a different building than what I showed in previous posts. It's the Bibi-Khanym Mosque, which was once the largest mosque in the world. It was commissioned by Timur's wife as a surprise while he was away.

The mosque pushed construction techniques to their limits. The people in the foreground provide some scale to the recessing arches at the main gate.

This is the innermost arch. It's said that the architect of the mosque fell madly in love with Timur's wife, and refused to complete the project until he received a kiss from her. He was beheaded shortly thereafter.

The mosque lies within the interior courtyard, and is crumbling a bit. 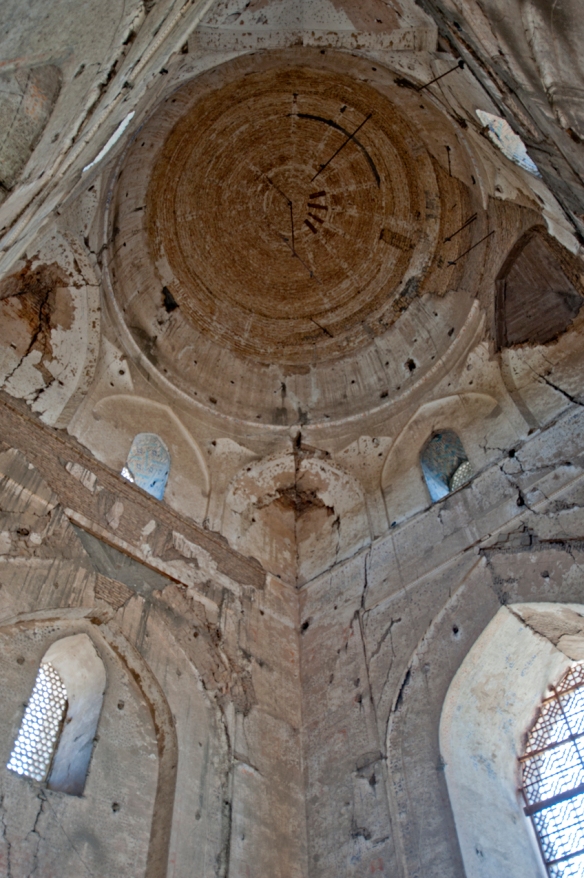 The domed ceiling towers overhead on the interior, and is in a bit of disrepair.

A view towards the courtyard form within the mosque. 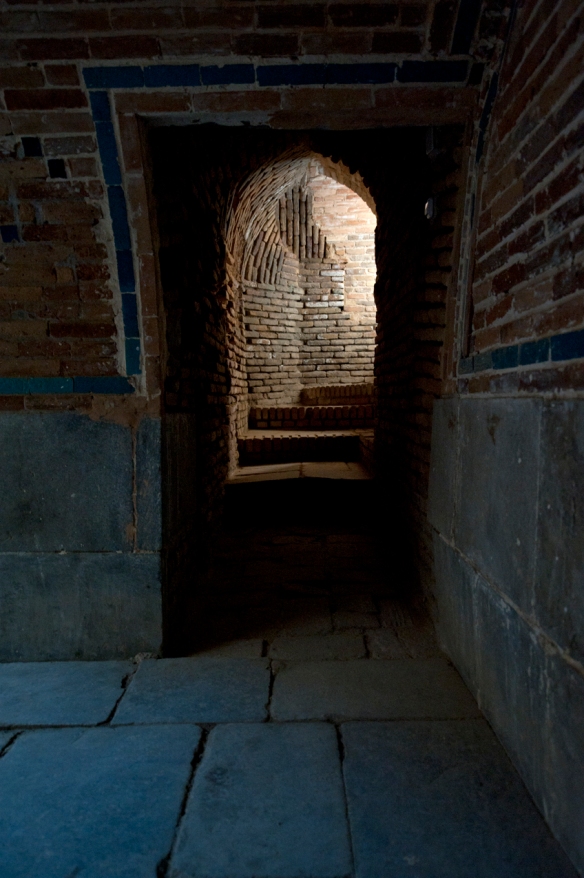 Timur's wife's mausoleum is directly across the street from the Bibi-Kharym mosque. The tombs are located down this passageway.

The ceiling inside the mausoleum has no lack of detail.

This is the tomb of the Old Testament prophet, Daniel. Timur supposedly brought the remains back from Susa, Iran. 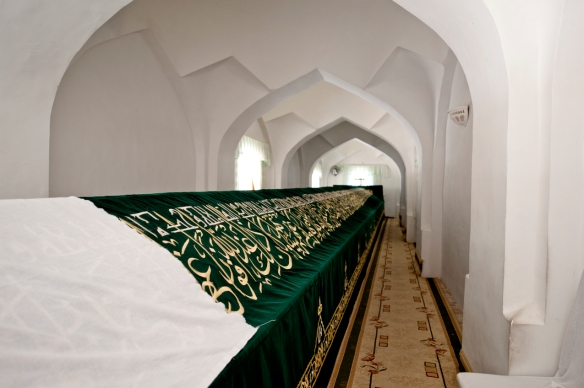 Daniel's tomb supposedly contains only his right femur, which, accordingly to legend, grows three inches each year. This explains why the tomb is 18 meters long.

I have no idea how anyone really knows what he looked like, but this is Ulugbek, the mathematician/astronomer king. This is at the site of what used to be his observatory, an supposedly incredible structure that I really wish had not been destroyed. All that remains is the enormous track for his 30-meter astrolab. I made a very long walk out here in the hot sun, stopping at Daniel's tomb, and a museum with no electricity, and was a pretty disappointed in the end, especially since I then had to walk back. 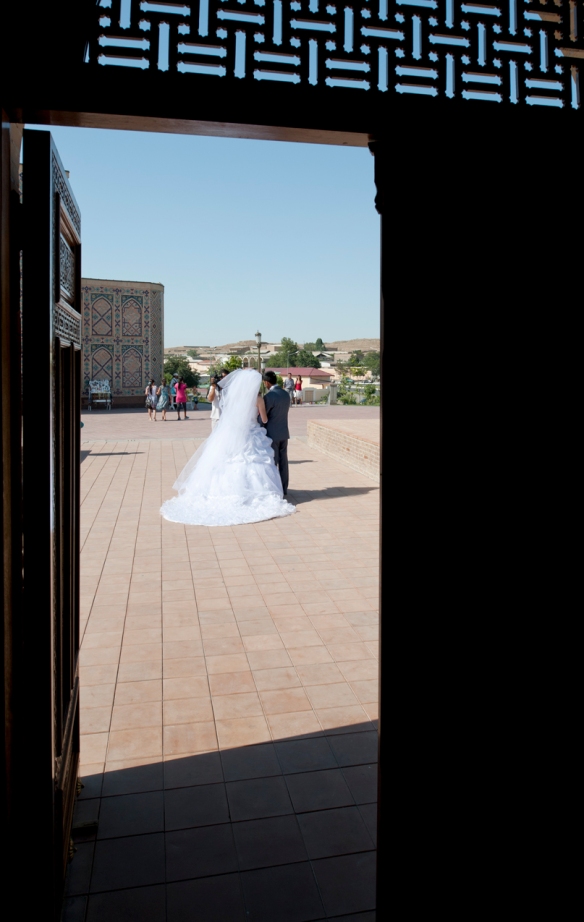 Some wedding photos were being taken at the site.

My B&B is conveniently located in the quaint Old Town of Samarkand.

This is one of the local youths who hang out on the street outside my B&B. Smiling's not cool here.

My dinner; some kind of soup with noodles, meat, and vegetables. Not bad.

For those who are interested, they still drive these old soviet cars around here. They sound their age, and, despite their diminutive size, have the turning radius of an average-sized cruse ship.

A popular evening treat here: ice cream with some sort of berry sauce, which is topped with cocoa powder. Due to some comments the last time that I showed an ice cream cone, my hand has been cropped out of this image.

These entrances in the Old Town reveal small glimpses of the beautiful courtyards within.

This fella tracked me down to get some pictures taken. 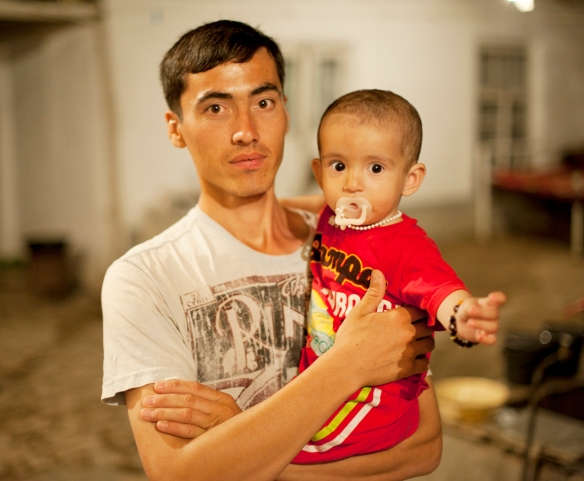 This proud father, named Muhammed, invited me into his courtyard for a photo shoot. Although he could not stop smiling the whole time that I was there, his face quickly went rigid as soon as the camera was aimed at it.

Muhammed's family, including his daughter, Annisa, are expecting me to mail them some prints of these photos. I'll have to get someone to make sense of the address that his wife wrote down for me, because I can't read it at all.

Of course, they insisted that I eat. I had just stuffed myself with bread at dinner, and ice cream on the street, so I didn't have a lot of room, but I was able to cram some more food in my stomach - just to be polite.

Muhammed's mother, Kimio, was one of the sweetest grandmothers that I've ever met.

Muhammed fancies himself a model.