After a morning that began with a 2:30 departure from my hotel, I finally arrived in Istanbul.   I set out with time to spare before my flight, and at the Tashkent airport parking lot, I was able to surreptitiously change the rest of my Uzbek money back to dollars through the window of a shadowy woman’s Chevrolet.  The customs procedures in Tashkent ended without incident, although I will not keep any fond memories of the airport, often called the most frustrating in all the world.  Although I haven’t been to every airport in the world, I can’t really think of any worse airports to which I have been.

The gates were not manned by airline staff, and when the announcements were made for flights, a mad stampede took place as people rushed to get to the doors, down the stairs, and onto the waiting buses that shuttled people to the planes.  Grandmothers, people with canes, and children were all swallowed up in the crowd.  When my flight was called, as people were rushing down the stairs, someone decided that they were at the wrong gate, and turned around.  In the mass confusion that ensued, everyone who had pushed their way to the stairs suddenly turned around, as if propelled by the same instincts that make schools of fish collectively change direction.  Of course, not understanding anything, I meekly followed along, assuming, like everyone else, that someone else knew where we were going.  We ascended the stairs, scurried across the waiting room, and struggled to get through another gate, only to turn around again when it was discovered that the leader of the pack was on a different flight.  When we finally made it back to the correct gate, and were waiting for the tarmac buses to take us to the plane, people had begun shouting in frustration.  Of course, there was no staff to which to direct these cries, so people just started yelling at themselves.

Eventually, I made it onto the plane, and enjoyed the window-seat ride over some stunning landscape.  Seeing the changing terrain below reinforced an issue that has been weighing heavily in my thoughts:  that by flying over such a huge swath of my route, I was going to miss out on all of the transitions between Central Asia and Europe.  Arriving here, I discovered that my apprehension was somewhat justified.  Suddenly, after five weeks of gradual transition from Xian to Bukhara, I had been transported someplace completely out of context.  Obviously, due to political situations in the countries which I skipped, the decision to fly here was the safest choice, but I can’t help feeling that I’m missing out on something.

Of course, I’m probably exaggerating a bit.  This place is not quite as far removed from the rest of my journey as I’m making it out to be, and it will fall on me to draw the connections to the places I’ve seen as I spend more time here.  At some point in the future, and I don’t know when I’ll ever get around to it, I would also like to spend more time exploring the rest of Turkey, which could take two months alone.  This might also help me fill in some of the missing pieces, barring a trip through Afghanistan, Iran, and Iraq.

Unfortunately, once I arrived here, I was pretty exhausted, and ended up sleeping through much of the day.  I made it out for a nice stroll in the evening, and had a good meal, but I don’t have too many photos to show for my first day here.  I’ll have many more tomorrow, and much more on my first impressions of the city that has been on the top of my “Dream Cities to Visit” list for at least fourteen years.

Here are the limited photos that I have: 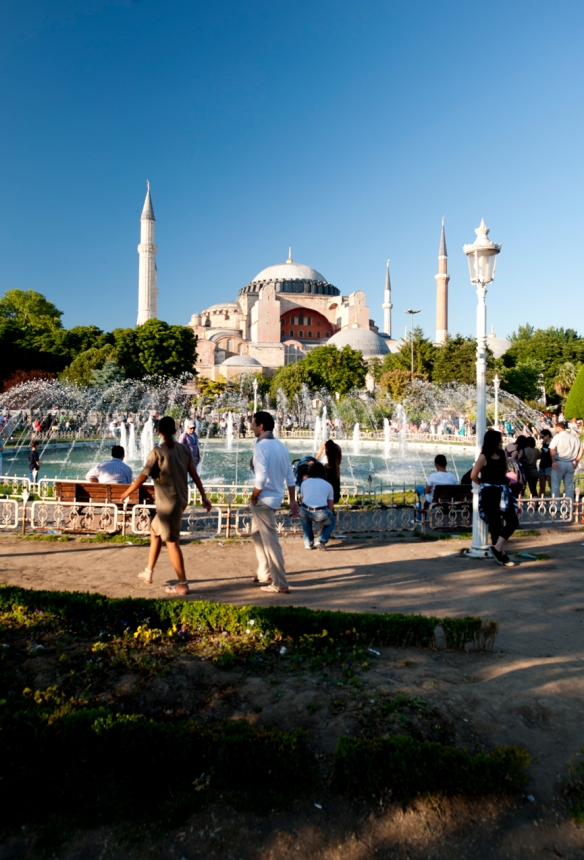 The Haya Sophia, a building that dates back to 537, is one of the structures that I've most wanted to see. I'll explore it more, and head inside tomorrow. 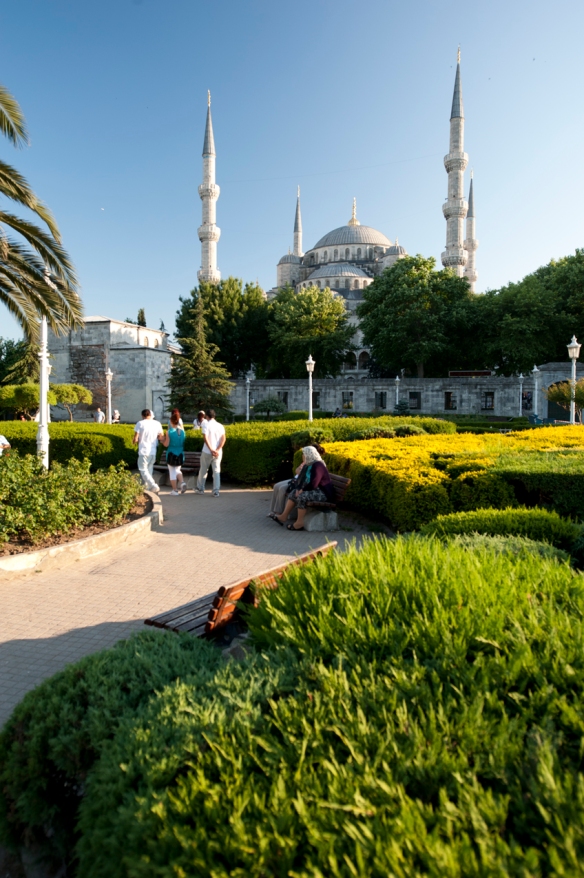 Just across a public square from the Hagia Sophia, sits the Blue Mosque. 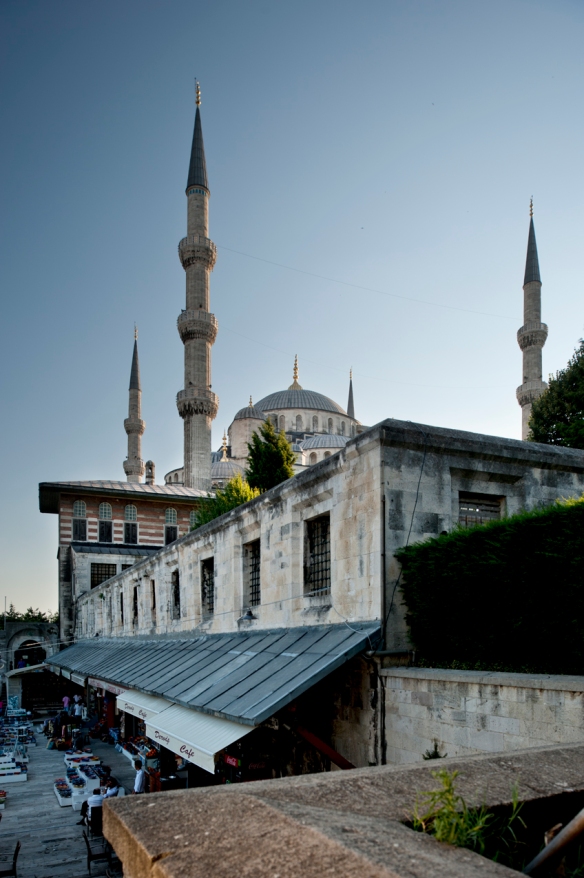 Old Istanbul was built on seven hills, and the city has a layered feel. In fact, this is the only city that I've visited over the course of this entire trip that has not been on a flat plain or valley. 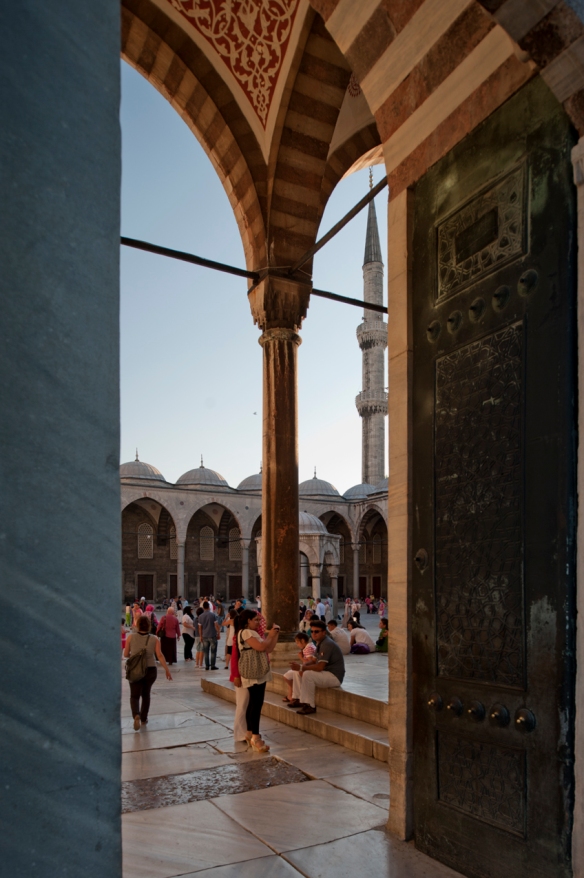 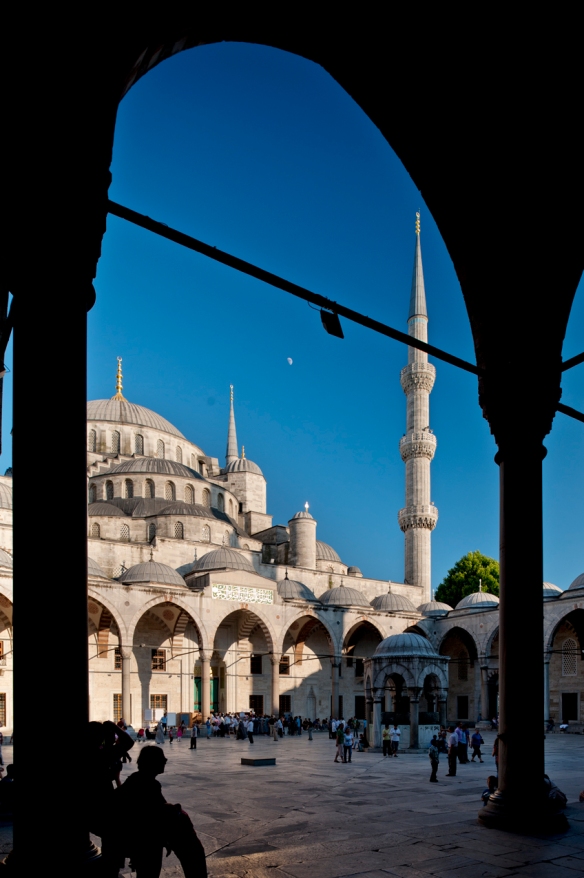 I was able to step into the Blue Mosque's courtyard before closing time, and discovered that the actual mosque was still open, too. 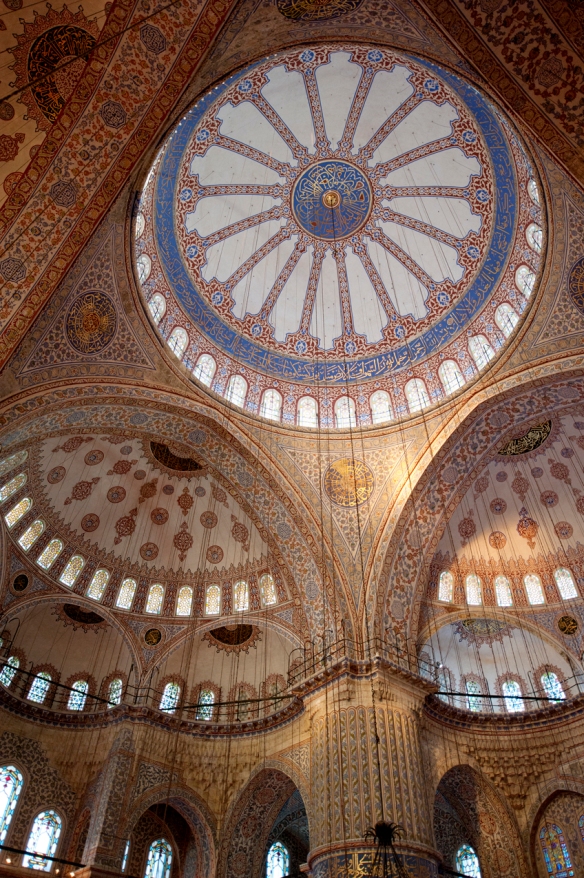 The great dome of the Blue Mosque. Upon entry, visitors are given a plastic bag in which to carry their shoes. The bags were not designed for people with shoes my size. 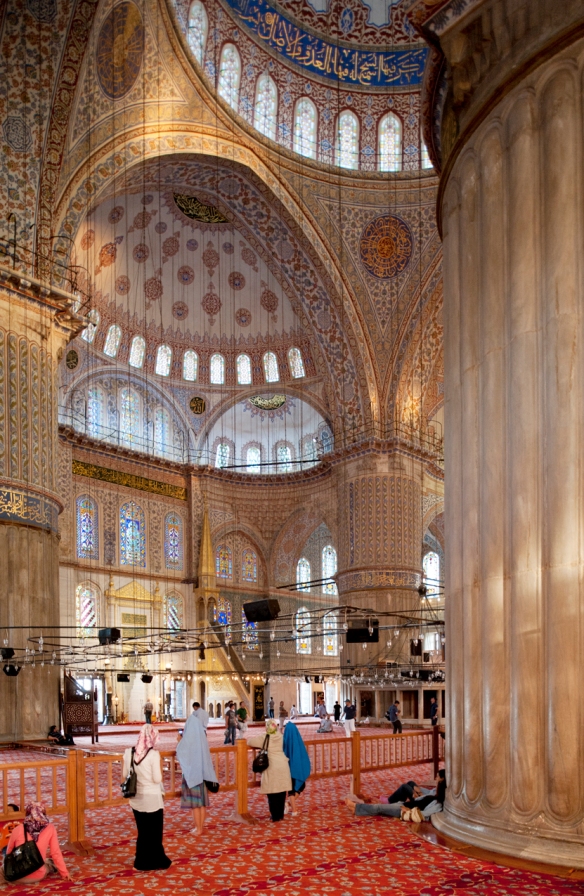 I'm trying to pace myself while I'm here, delaying gratification, and saving some of the sites that I've really been dreaming about visiting for later days. However, it's no exaggeration to say that visiting the interior of this space was the fulfillment of a long architectural dream of mine. It was a moving experience, and I know that there are more like this to come. 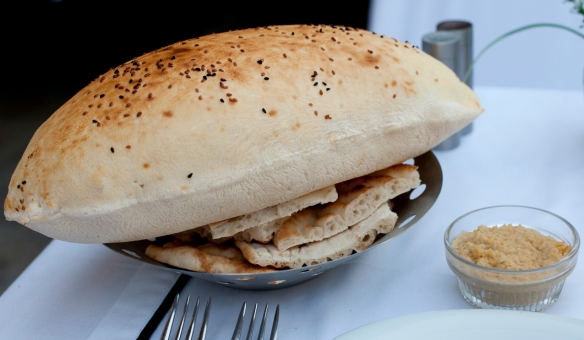 This puffy bread seems to be pretty popular here. I saw it on a lot of tables as I walked around. It's really a very thin layer of bread, filled with air, and was served with a chickpea paste. 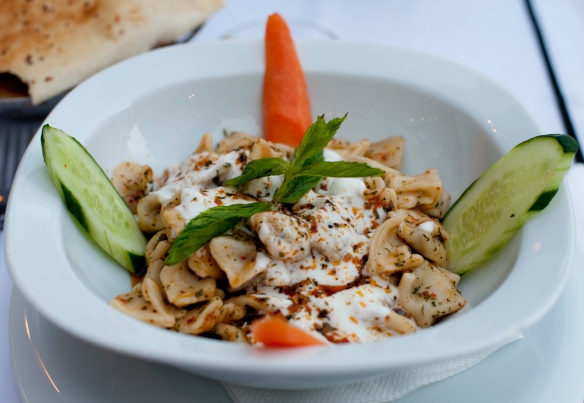 My dinner: Turkish ravioli, filled with meat, and covered with a light yogurt sauce, chili oil, and mint. My stomach has shrunk a lot over the past few days, and this was way too much for me to eat. 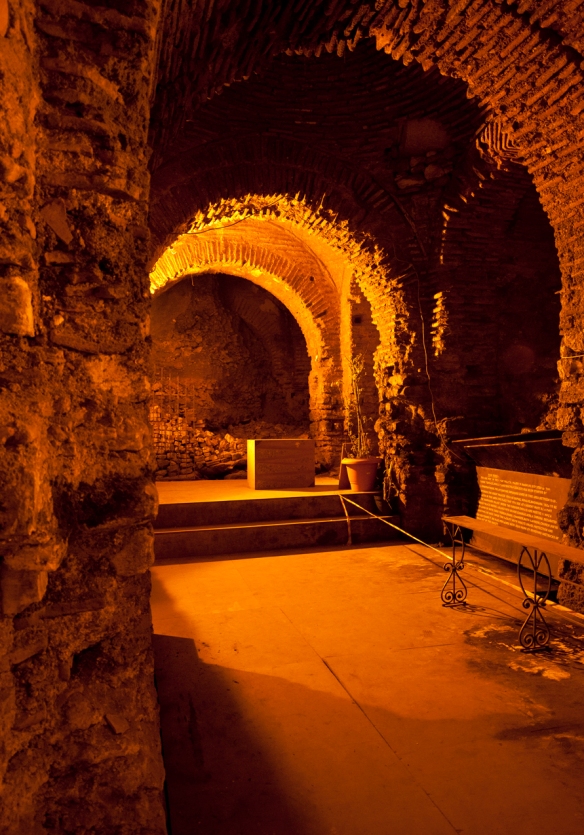 To my surprise, there was an entrance to an ancient Byzantine palace in the back wall of the restaurant where I dined. The palace is now completely underground, and is currently being excavated. 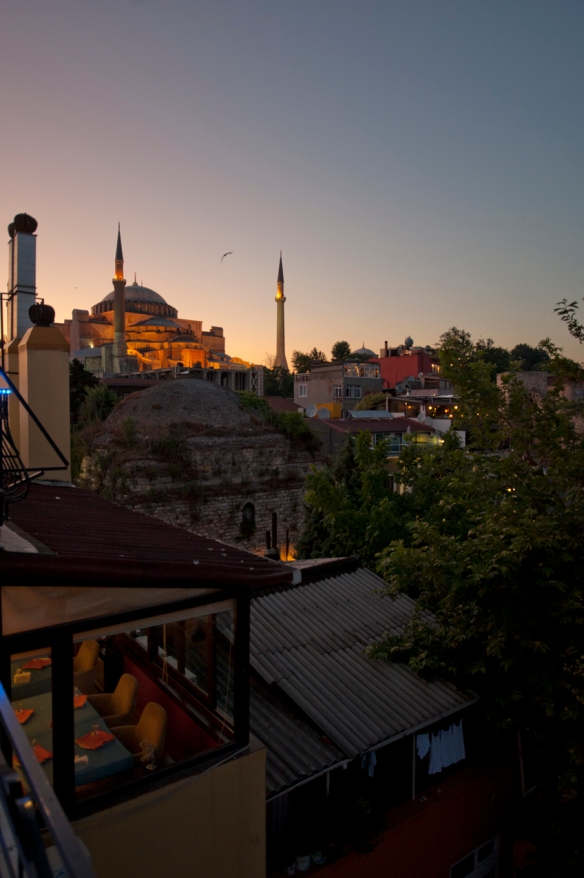 My hotel has a fantastic roof terrace. This is a view up towards the Hagia Sophia.

7 thoughts on “Passage to Istanbul”