Since I was forced to post only a brief update from Padova yesterday, here’s the rest of the news from the Veneto.  This is one of those places where I wish I could spend more time, not necessarily because I want to see more sites, but because I have enjoyed acclimating to the culture. 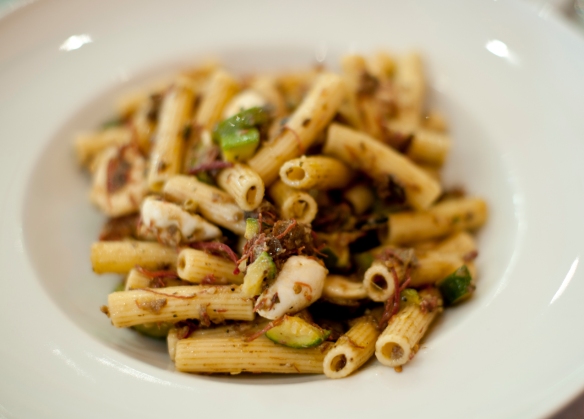 I'm moving away from Venetian seafood, and this pasta with meat (not sure which kind), olives, and mozzarella made a great lunch. 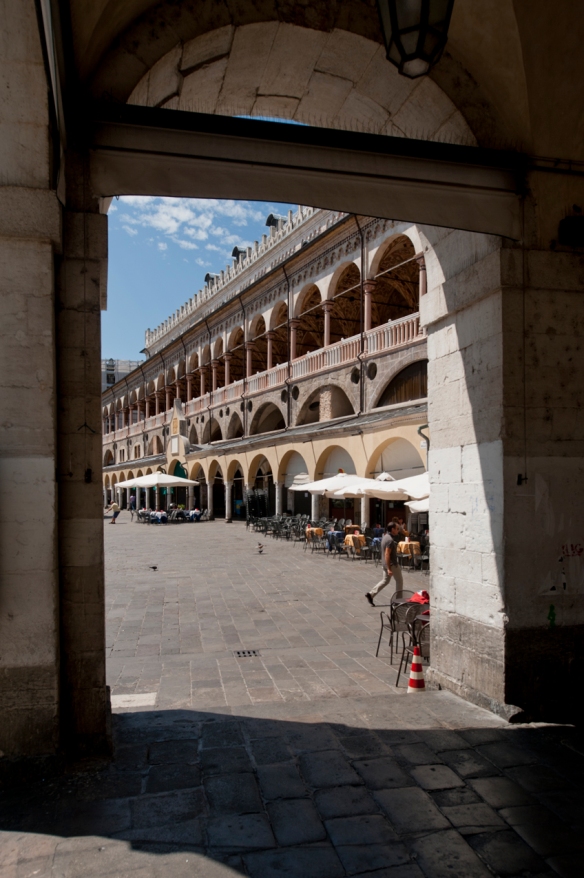 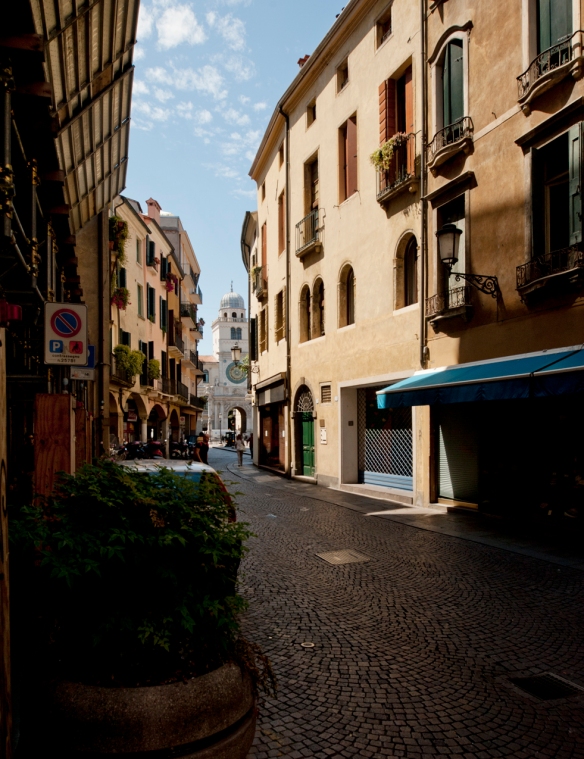 The winding narrow streets open up onto small piazzas that are filled with cafe tables. 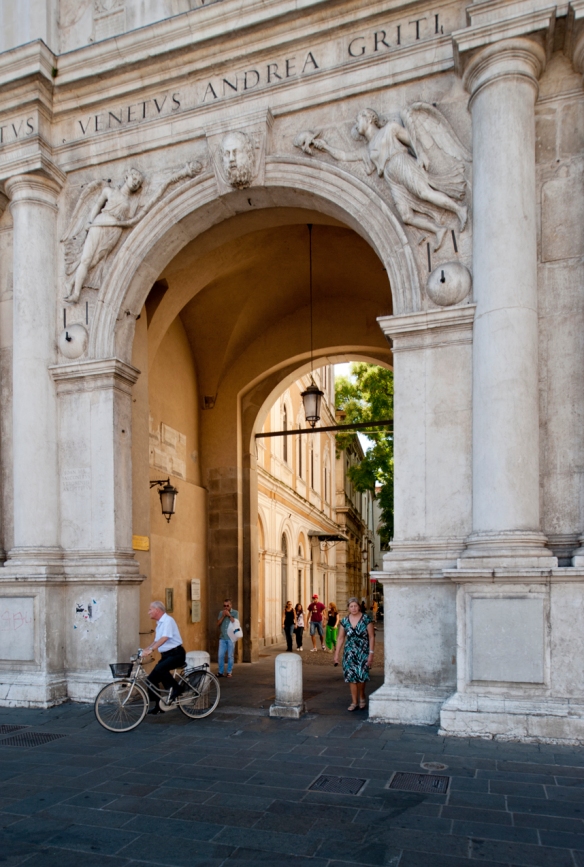 There seem to be equal quantities of bicycles and cars in this town. After being in Venice, i was a little out of practice in sharing the road with them. 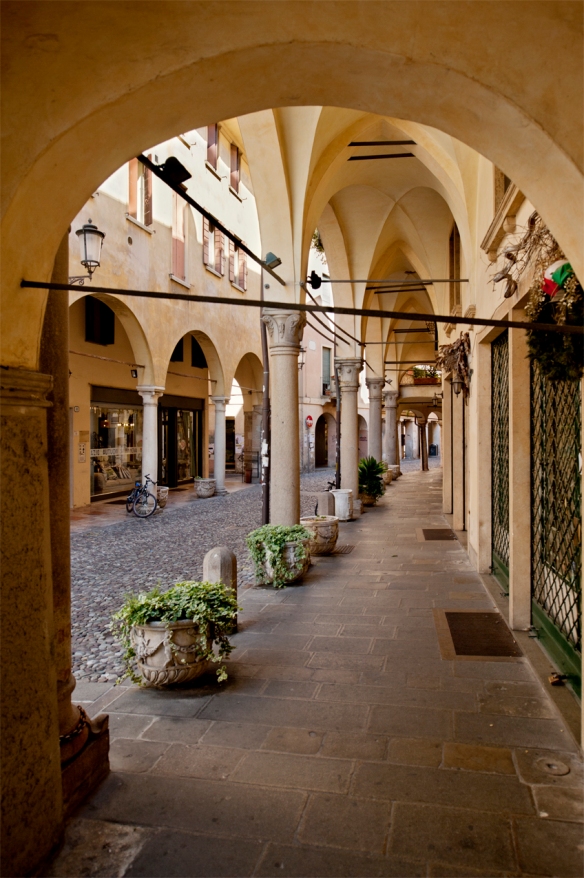 Padova has an endless series of arcaded streets, which provide a cool breeze on a hot day, and shelter in the rain. 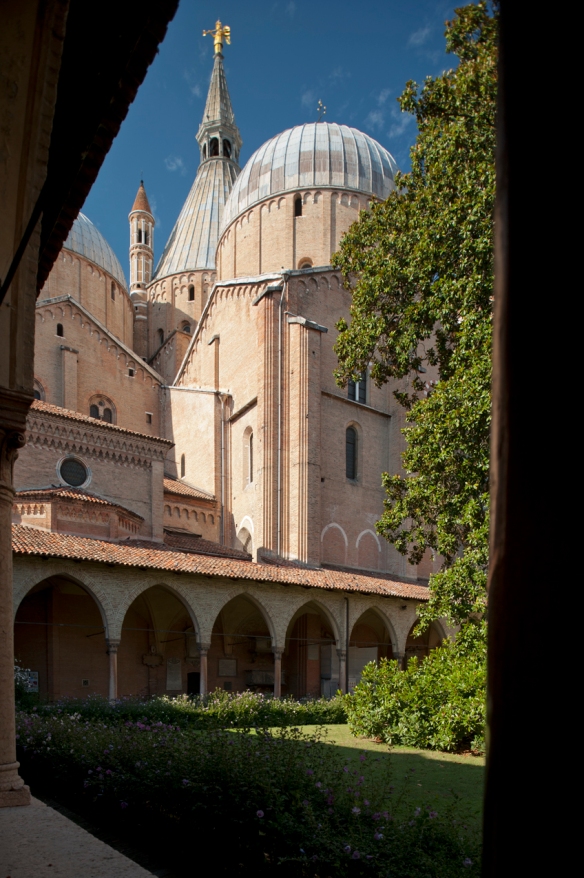 The Basilica di Sant' Antonio is surrounded by some peaceful cloisters, and the monastery here is still active. 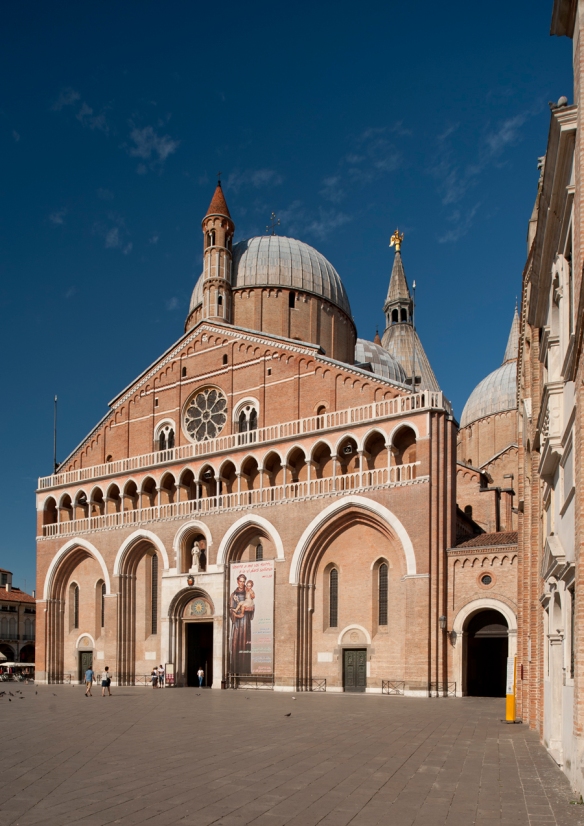 Sant' Antonio houses a bunch of relics of Padova's patron saint, Saint Anthony. Among other body parts on display, his tongue is preserved in a glass and gold jar. I would not have known that it was a tongue if I hadn't been told, because it looked nothing like flesh. Photography is strictly prohibited within, but I must say that after seeing Hagia Sophia, which was built in 537, the church, built around 1200 could not help but seem dark and a bit stifling. It's amazing that I'm still more and more impressed with Hagia Sophia, and I'm now nowhere near it. 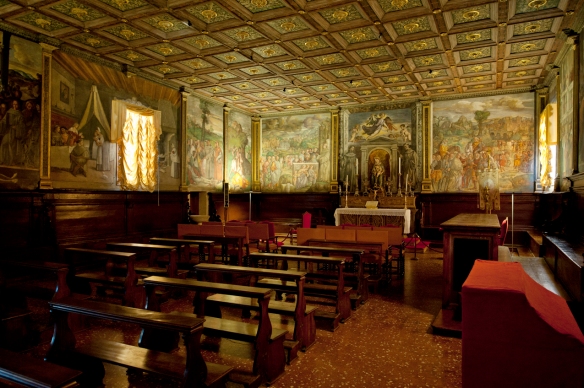 Next to Sant' Antonio, the Scoletta del Santo (pictured here) contains a number of early Titians, and the neighboring Oratorio di San Giorgio is covered in frescoes by Altichiero da Zevio and Jacopo Avanzi. For some reason, these are not at all popular with tourists, and while I was joined by the sleepy guard at the Oratorio, he let me into the Scoletta all by myself (which is why you see a photo of it). I was thoroughly impressed by the Oratorio, and after later seeing Giotto's frescoes, it was interesting to see how much painting had changed in sixty years. The frescoes depict the lives of Saints George and Lucy, and it was fascinating to look at them as precursors to comic books. I was particularly taken with Saint Lucy's story, and her face was recognizable in each frame. In one panel, which reads from left to right, she appears three times in the same scene, escaping death twice, and succumbing to a ruffian's knife. 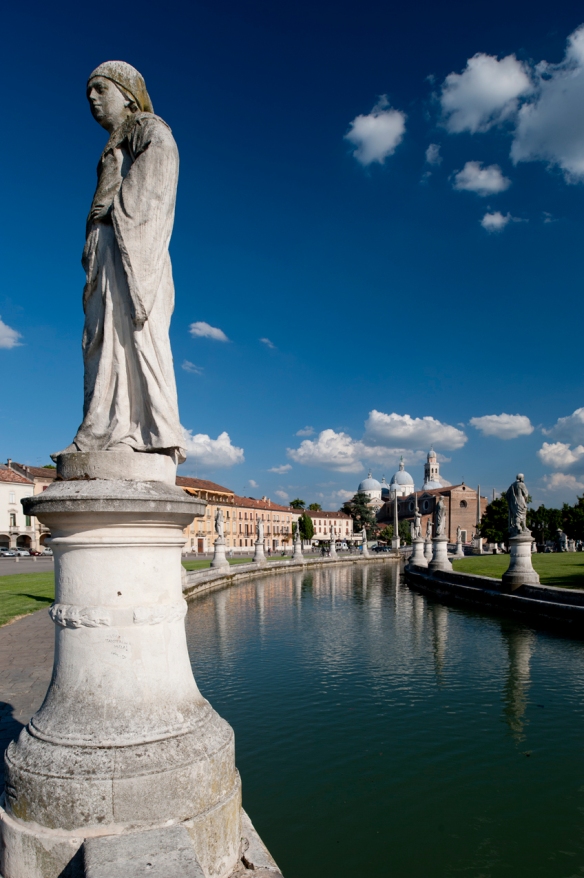 The eliptical Prato della Valle is lined by 78 statues of Padovans from history. In the distance, the Basilica di Santa Giustina can be seen.

Another site that tourists seem to disregard, the Basilica di Santa Giustina is a huge, quiet church with spare ornamentation, and a painting of Santa Giustina by Veronese. 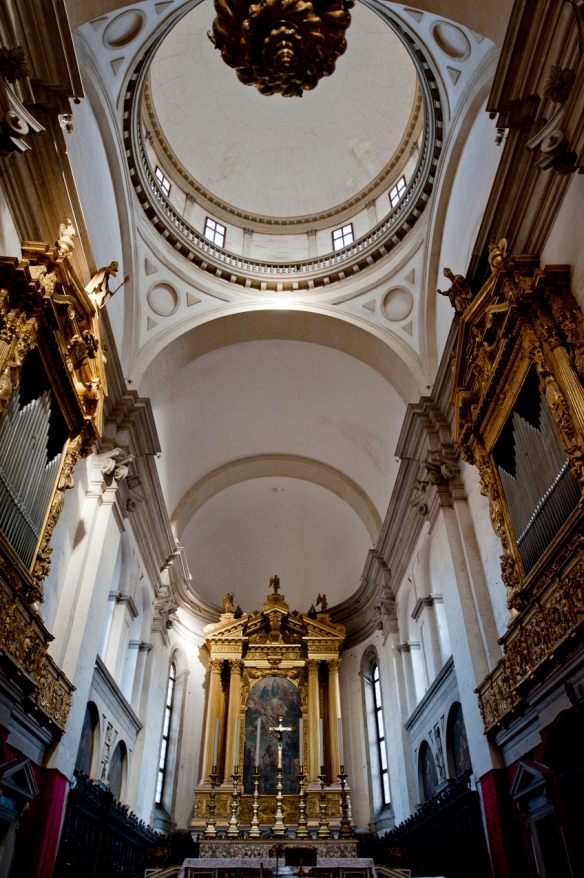 The apse contains the most ornamental portions of the church, and gold provides the dominant color. 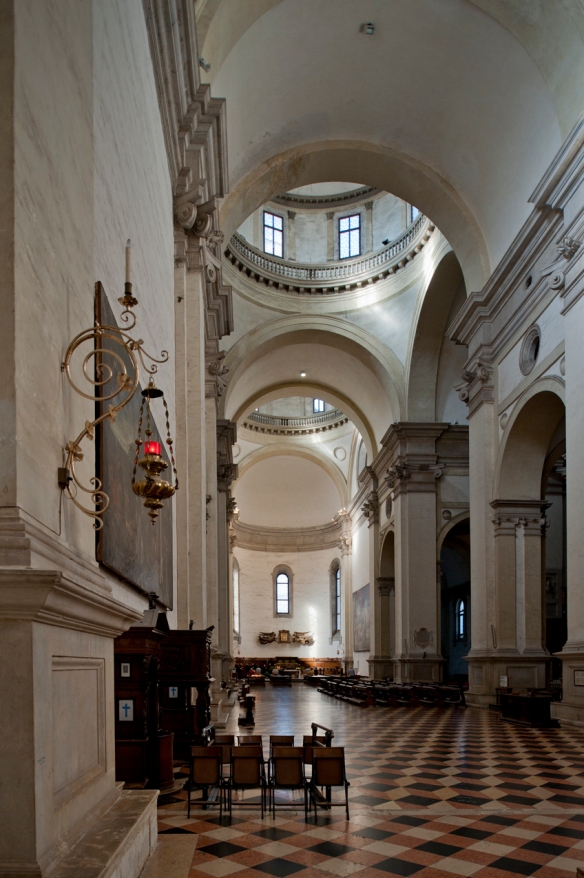 In the distance of this picture, which was taken across the transept, a small service was taking place. The monks were singing the mass in the most mellow, delicate fashion, which made every other mass that I have heard seem like heavy metal compared to Chet Baker. 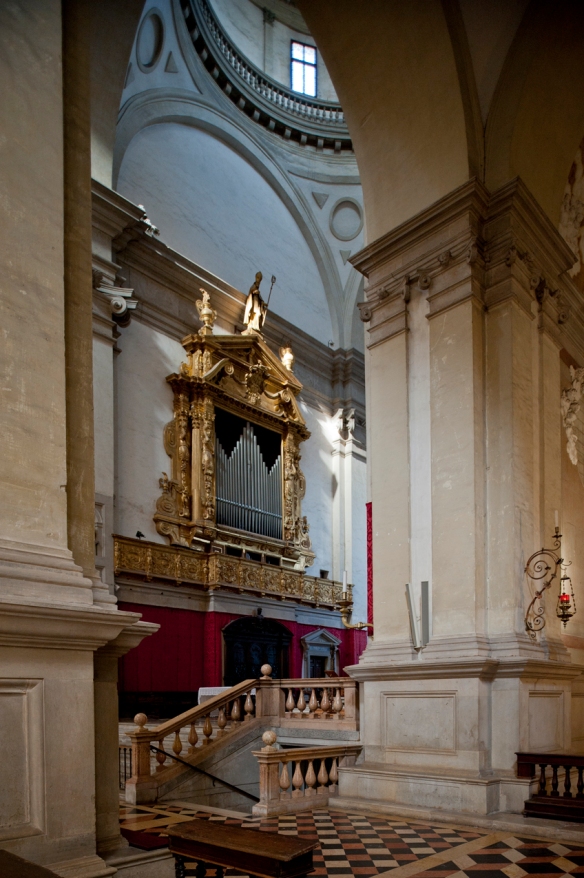 The music definitely contributed to my appreciation of the church, and like witnessing a service in one of Istanbul's mosques, it was great to hear the church filled with its intended sounds. 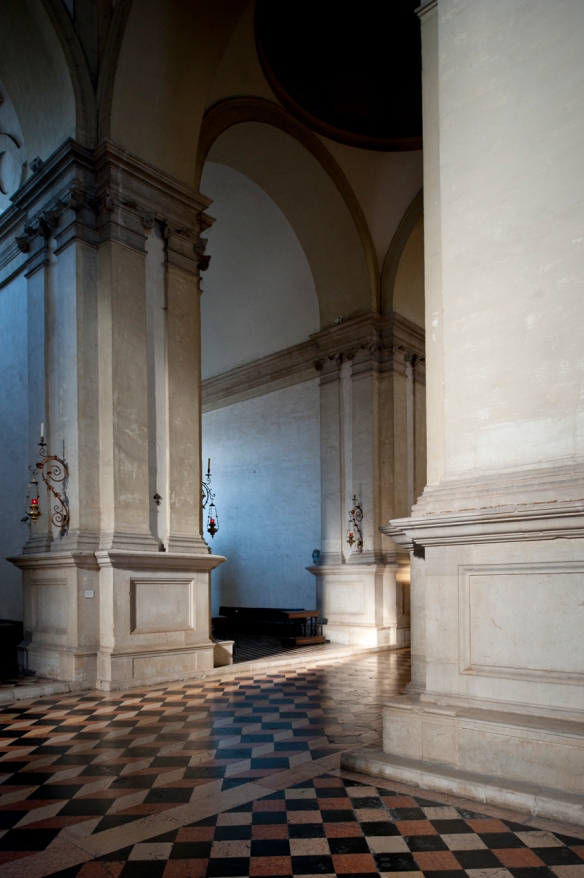 After seeing countless churches coated in frescoes and intricate carvings, this place was refreshingly simple.

From what I could tell, the doors to the basilica, in addition to the relief above the left door, were added recently to the 16th Century facade. 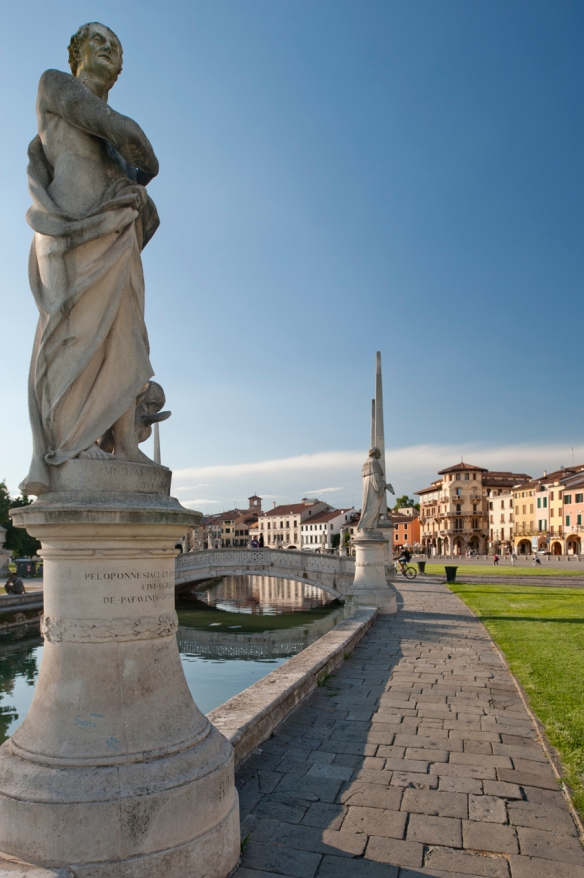 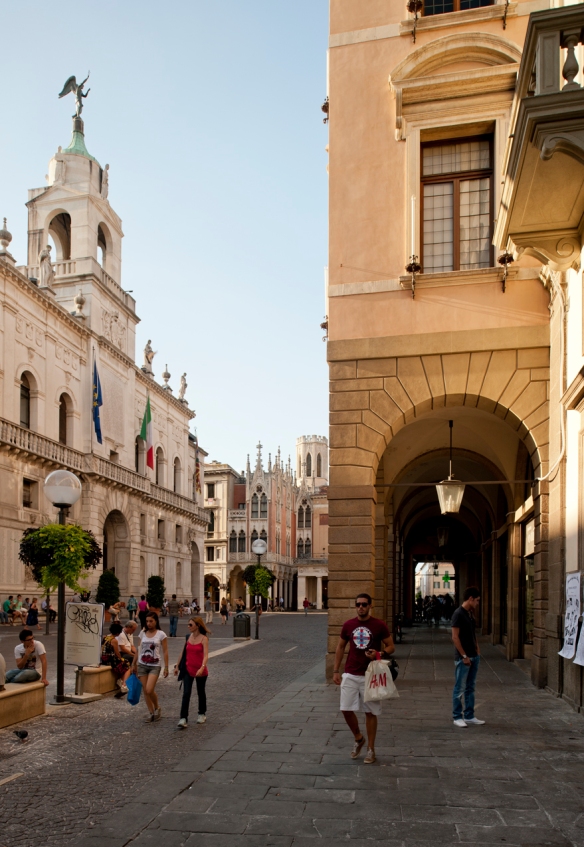 Towards evening, Padovans make their way to one of the countless outdoor cafes for aperativi. 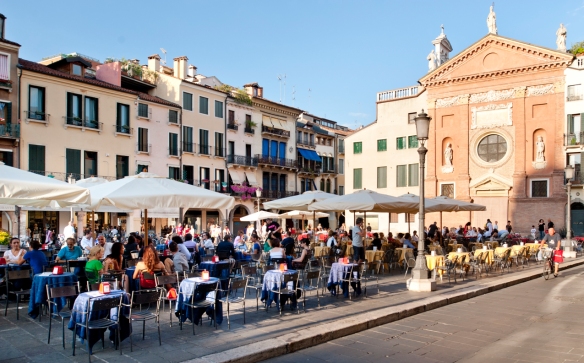 Not a bad place to enjoy a spritz. 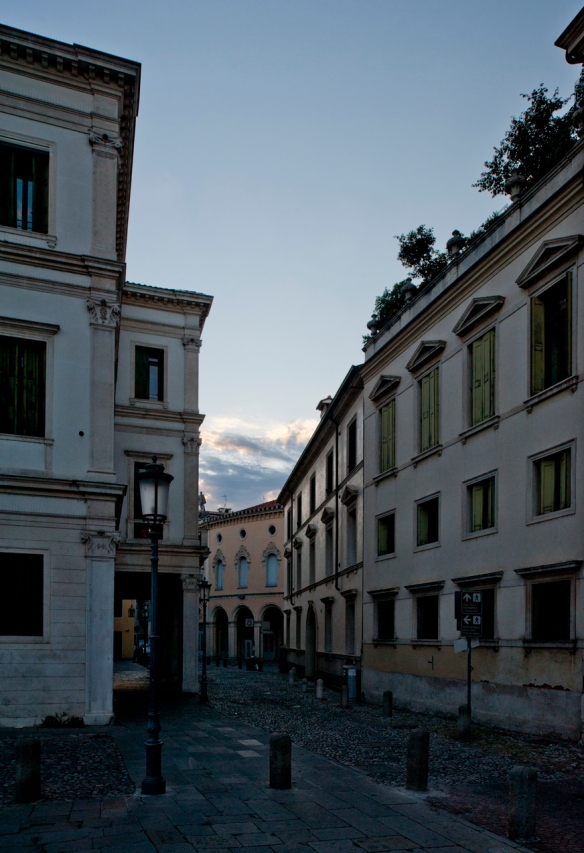 The roads in the older part of town are composed of round river stones, which makes them somewhat uncomfortable for walking. Fortunately, smooth marble paths surround them. 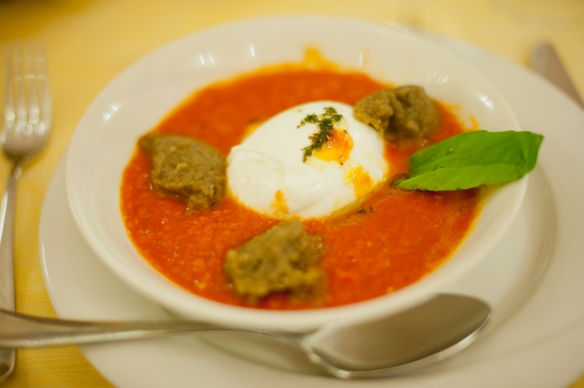 My waitress recommended that I try this dish, mozzarella di bufala, tomato sauce, and pureed eggplant. I had been looking forward to having some bufala mozzarella for a long time, and this did not disappoint. 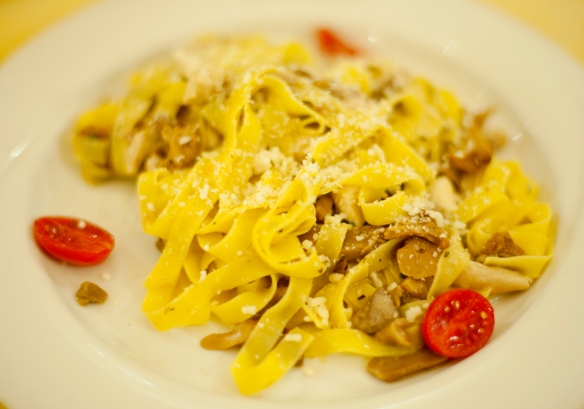 For dinner, my waitress suggested this, tagliatelle with rabit and mushrooms. 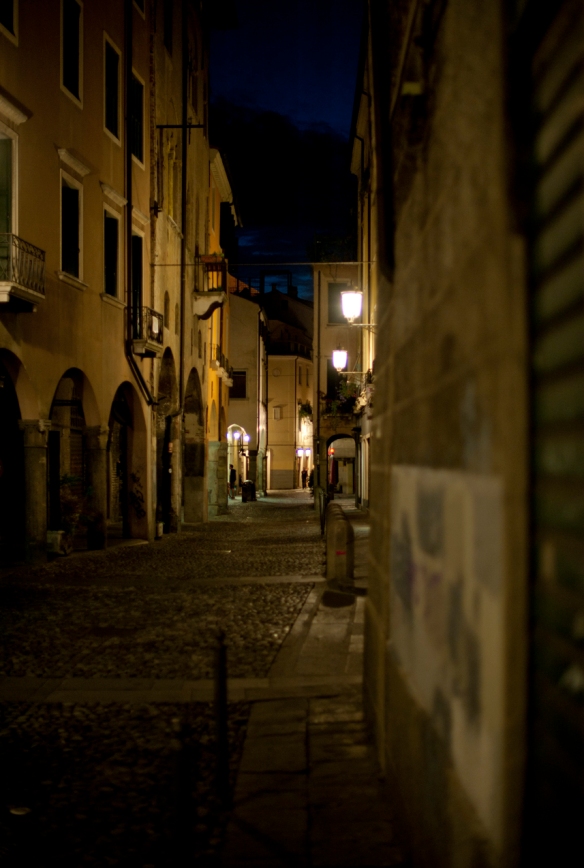 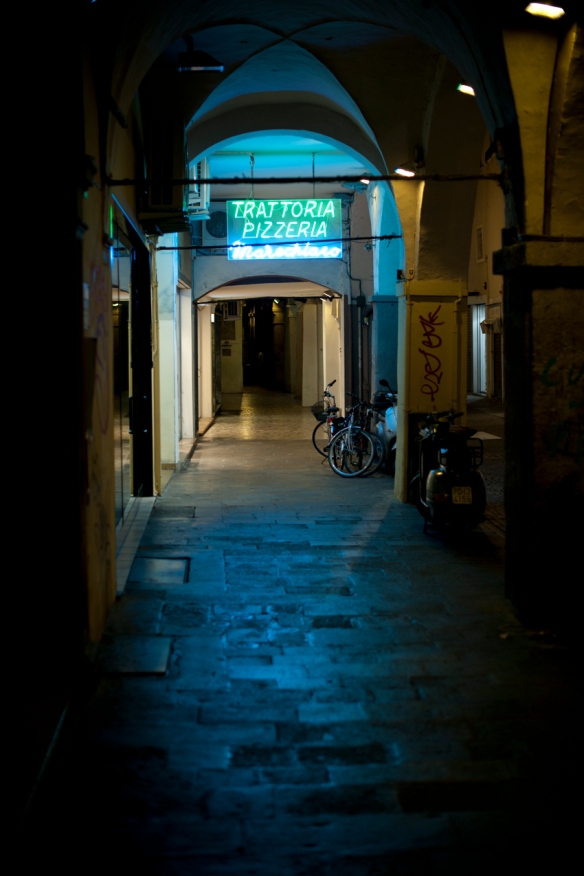 A beacon for late diners. 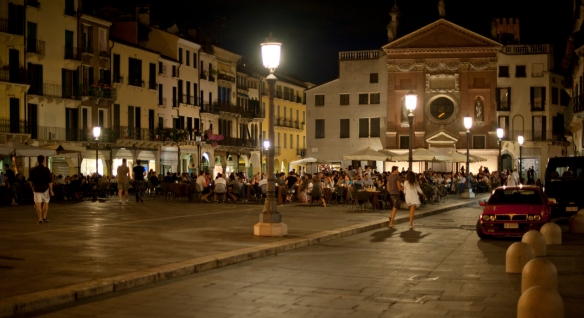 Although the streets go quiet, the piazzas come to life, and people stay at these outdoor cafes well into the night. 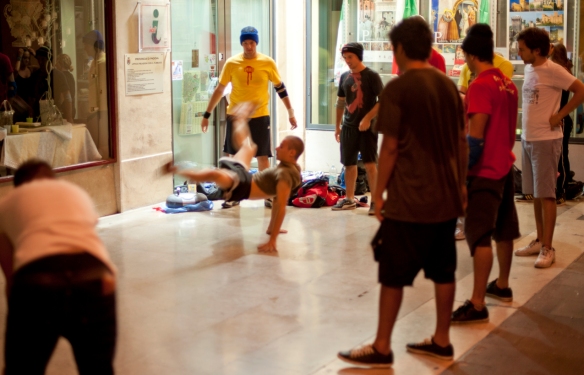 I turned a corner to find these kids practicing their breakdancing. 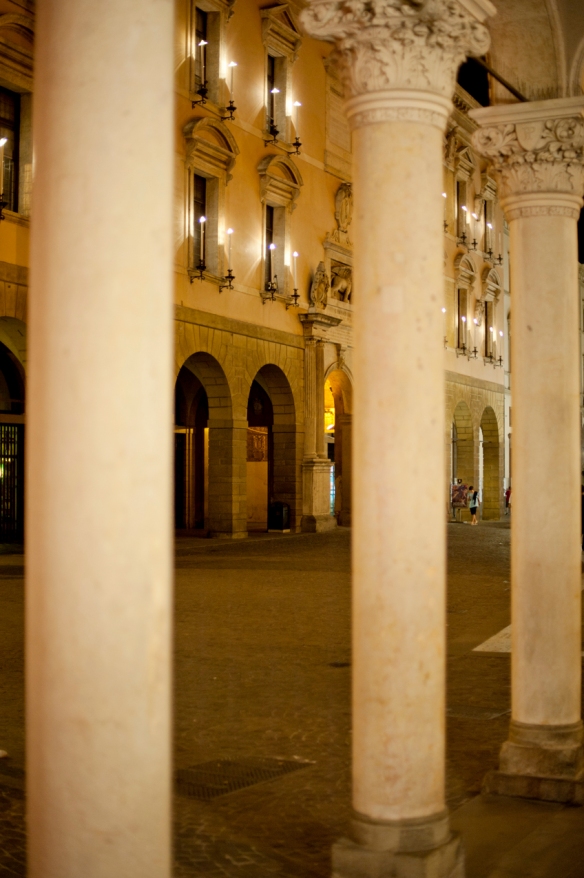 Within earshot from the dance party, a view from the eighteenth century.

3 thoughts on “Relics and Bufala”