It’s been while since I posted, so I thought I’d update with some photos from a few days ago.  Elizabeth and I spent the day at Versailles, and although we got a late start, and had to fend our way through almost unbearable crowds, we ended up having a great day in the gardens.  I have recently become obsessed with French formal gardens (something about their willful artifice and exploitation of perspectives), and these, of course, did not disappoint.  We’re in Provence now, and I’ll update with photos when I get a chance!   Here are the photos and comments (click on them to enlarge):

Our day started out with lamentable weather. Not only did we arrive with every other tourist in Paris, but we also had to wait in the rain. 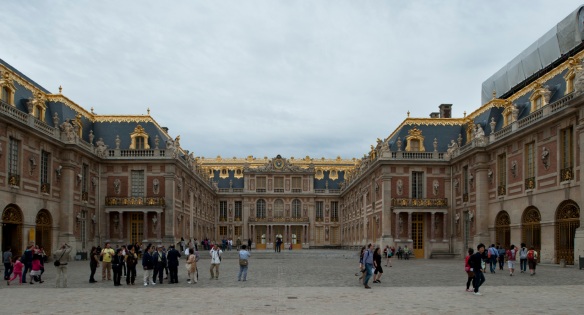 The weather forecast called for clearing skies later in the day, so we opted to see the interior of Louis XIV’s palace as soon as we got there. So did everyone else.

The formality of the 17th C court remains: Now only school teachers wearing outfits that match the chairs, and who escort skipping schoolchildren, are allowed into the chapel. 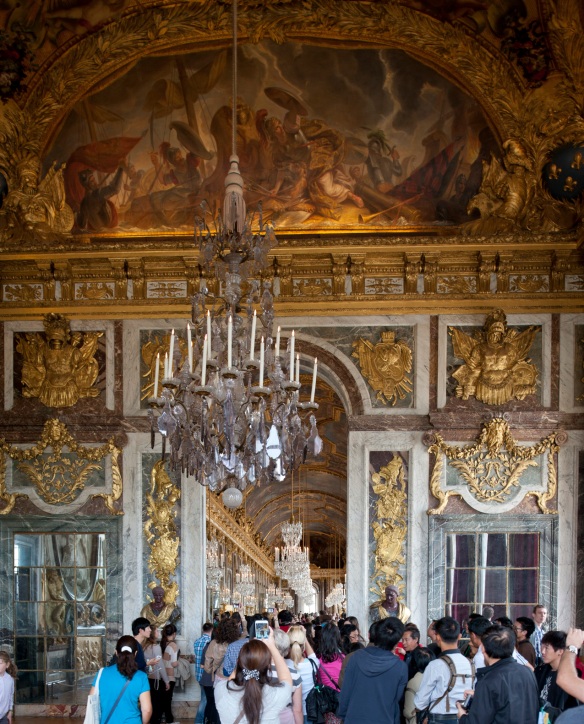 By the time we reached the hall of mirrors, we couldn’t wait to get out of the palace. The heaving crowds took almost all of the enjoyment out of the visit to the royal apartments, a visit that I might have otherwise relished.

Something tells me that the Hall of Mirrors loses its effect when crammed with people like this.

Once we got outside again, the whole day turned around. The orangerie, where citrus was originally grown and displayed, was almost completely abandoned.

I don’t know much about citrus cultivation, but it seemed odd to me that the trees with the most fruit had virtually no leaves. 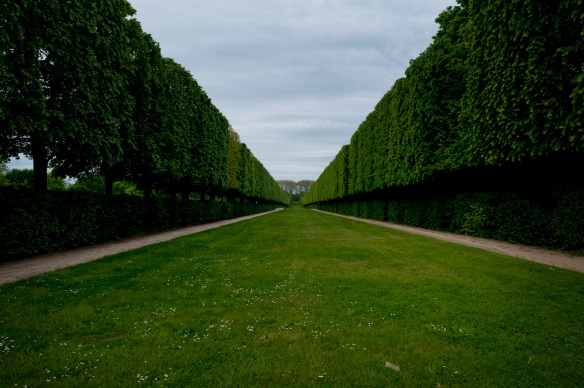 The long allees are evocative of an era when mastery over nature was still seen as a novelty. I had been really looking forward to wandering around Le Notre’s gardens.

What kind of person earnestly compares himself to Apollo? Either Louis XIV had an under-appreciated sarcastic sense of humor, or a conflated self image. This is the Apollo fountain, with the god rising out of the water.

To Le Notre, a garden view was a 3-dimensional affair. 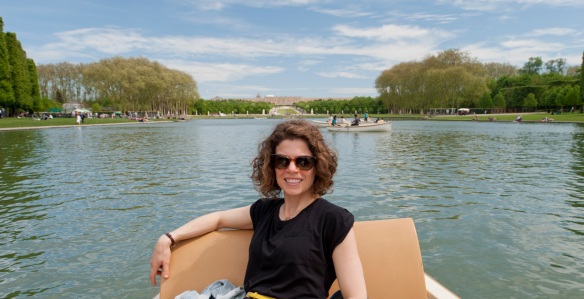 We decided to rent a rowboat in the Grand Canal, which is, essentially, a massive man-made lake in the center of the gardens. It stretches to 1.5 km long, and there is a cross-piece that is 1 km long.

The Canal was so large that it had its own current. Where the two pieces intersected, a strong breeze kept pushing the boat north. As hard as I tried, I couldn’t make much progress towards the southern extreme.

Elizabeth gives it a two-minute try. 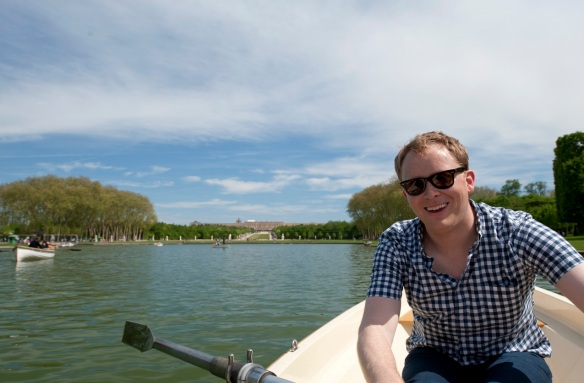 I wearily kicked it into overdrive to make it back to the dock to avoid paying for a full hour. That’s the palace in the background.

Le Notre created huge “forests” on the property, which connect the various palaces, and presumable provided some hunting grounds, but even the forests are carefully planned and groomed. This is the path to the Grand Triannon, or palace away from palace. 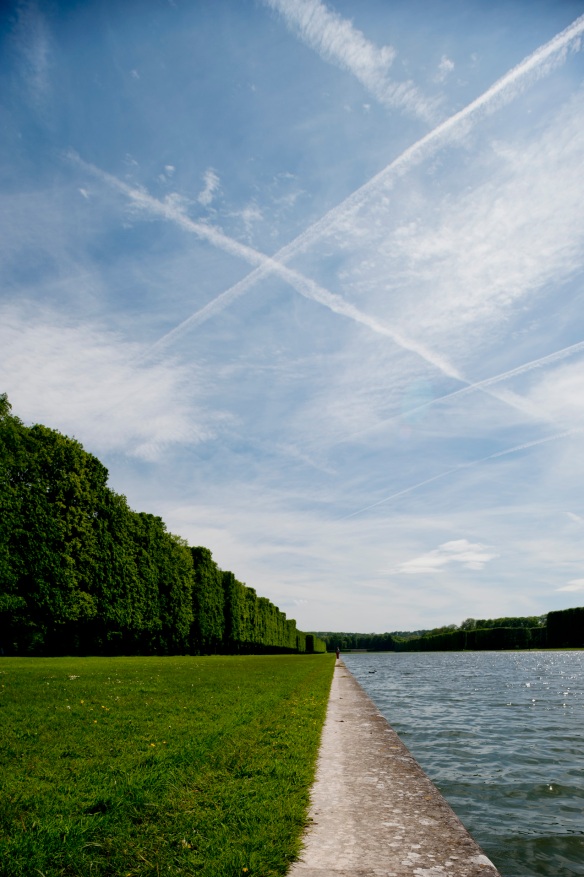 We took a nice break to dip our feet along the northern section of the canal. It didn’t appear that any of the other rowers were able to make it this far, either.

The allee that leads back to the Apollo Fountain. 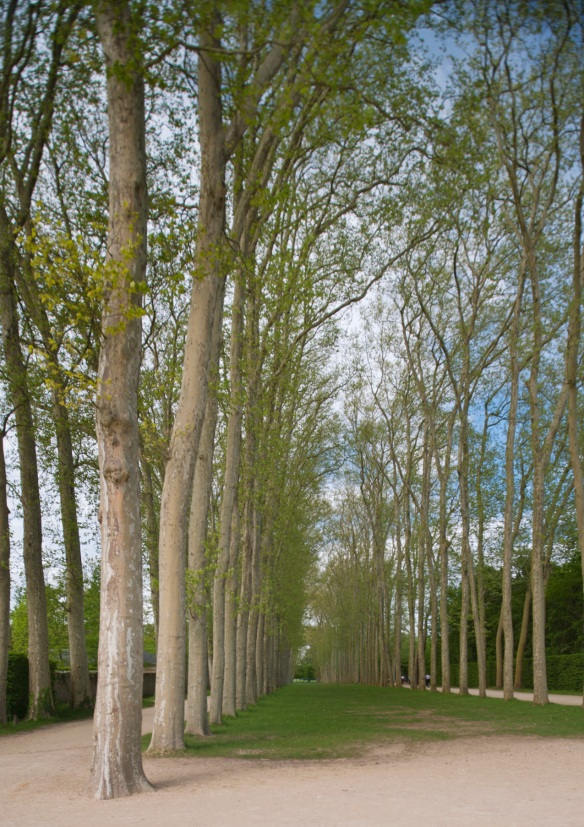 Every view terminates in a distant tunnel of trees. 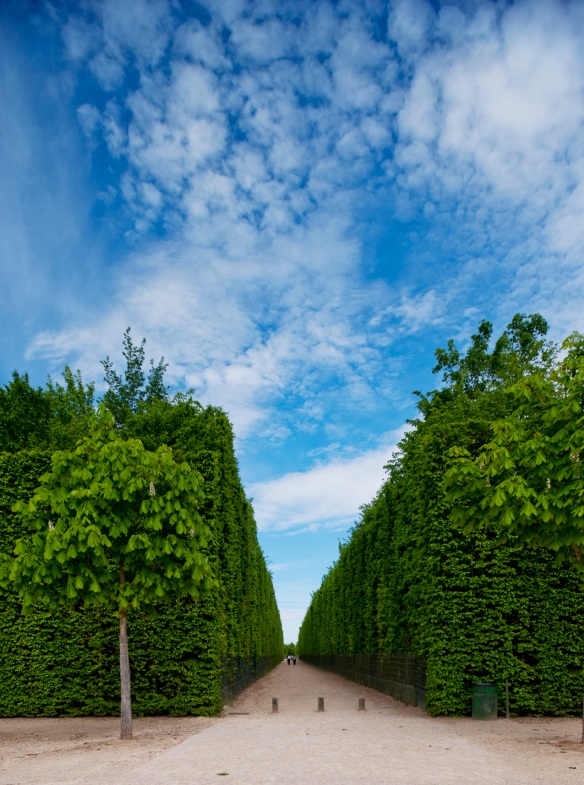 My favorite parts of the gardens were the bosquets – perfectly manicured, green-walled passages through dense one-specied forests.

Although these bosquets did not include a labyrinth (the original one was removed in the 18th C), Elizabeth and I had no trouble getting lost within.

Which way to go?

One stubborn branch makes fights its way into a tightly groomed allee. I have no doubt that its days are numbered.

I imagine that all sorts of illicit things could have taken place in the bosquets when they were first built, but the long views make discovery all the easier from a great distance. Unlike the enfilades in the great french chateaux, with their off-axis cabinets, there is really nowhere to hide from the long perspective. 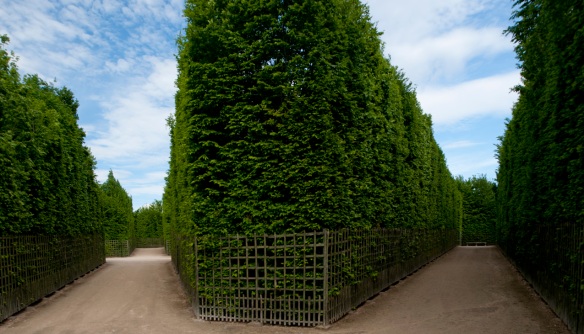 A fork in the rode, followed by a couple of other forks in the resultant roads.

We were rewarded for our morning showers with beautiful clear skies for most of the day.

We’ll have to come back some day when the fountains are running. Unlike those in many other gardens of the era, those at Versailles are pump fed because Louis XIV chose to build his palace at the highest point.

A last view back towards Le Notre’s gardens, and the Grand Canal stretching to the horizon. 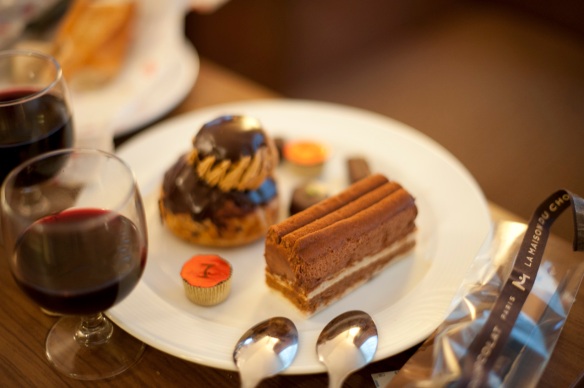 The real stars were the desserts, a mouse and meringue creation, and a religieuse, supplemented with chocolates.